Have a heart for Chess

I'm busy this week getting ready for the American Heart Association chess related Fundraiser taking place THIS SUNDAY AT 1PM AT THE BOYLSTON CHESS CLUB details here . I have been reviewing Petrosian's games at the Zurich 1953 and will follow up soon with a post to continue my series.
In light of Mike Griffins lead at the BCC blog on how many chess players have died from heart disease extracted from Bill Wall's page on the death of chess players, I thought I'd augment this list in true blunderprone fashion with pictures to most of the names mentioned. This will be on display at the Event. I hope you all can come.
This hobby of ours is a deadly sport. Take care. 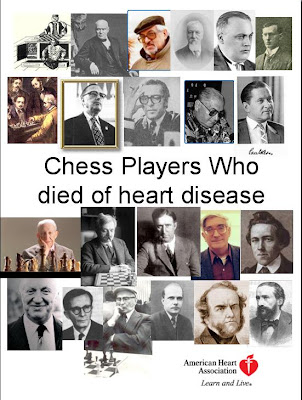 Posted by BlunderProne at 10:19 AM

Always knew chess was more stressfull then it seems.

I thought Zuketort was murdered.

I cut and pasted the list from Bill Wall with out much further research. My bad.