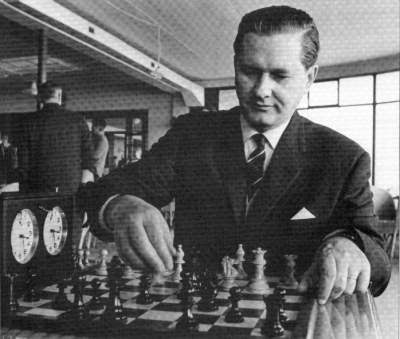 Paul Keres was born in Estonia on January 7, 1916 making him 37 at the time of the candidates match in Zurich. He grew up in Narva, Estonia, a town that had a scarcity of chess literature. He learned the game from his father and older brother and learned notation from the chess puzzles in the daily newspaper. He took it upon himself to compile a handwritten collection of about 1000 games. This probably helped him become three time Estonian school boy champion in the early part of the 1930’s. He learned about correspondence chess while attending high school. He attended the University of Tartu in 1937-1941 studying Mathematics and represented the school in several interuniversity matches.

In 1935 he was the Estonian champion and played on the top board for Estonia that same year at the Chess Olympiad. His sharp attacking style gave him some recognition which led him to pursue international events. In the mid to late 1930’s, he had several strong finishes in matches throughout Europe. In 1938, he tied with Reubin Fine for first in the AVRO tournament. He beat Fine in a tie breaker and expected to contest Alekhine for World Championship but World War II broke out and with the occupation of Estonia the match was denied. During the War, Estonia went from being annexed by the Soviet Union to being under Nazi control after the invasion in 1941. During the War, he was able to play in several Navi-sponsored events including Alekhine, but never got to contend the World Championship title and always seemed to finish just behind Alekhine. He played in other smaller events in the early 1940’s with strong results.

When the Soviets recaptured Estonia in 1944, Keres was unsuccessful in his attempt to flee and had to face harassment and threats by Soviet authorities. Keres managed to avoid deportation at the cost of being delayed coming back to international play. For Political reasons, he was excluded from the 10-player roster for the Soviet team for the 1945 Radio match against the USA and again in Groningen 1946. He played a few successful matches locally in Estonia. It wasn’t until 1946 where he returned to international play in the Soviet Radio Match against Great Britain.

Odd how Keres became a seed for the Zurich match as a result of the 1948 World Championship match in 1948, arranged to determine the world champion following Alekhine’s death in 1946. At the 1948 event, his performance was far from his best. Held jointly in The Hague and Moscow, the tournament was limited to five participants: Mikhail Botvinnik, Vasily Smyslov, Keres, Samuel Reshevsky, and Max Euwe. (Reuben Fine had also been invited but declined.) A player met each of his opponents five times. Keres finished joint third, with 10.5 out of 20 points. In his individual match with the winner Botvinnik he lost four out of five games, winning only in the last round when the tournament's result was already determined.

Since Keres lost his first 4 games against Botvinnik in the 1948 tournament, suspicions are sometimes raised that Keres was forced to "throw" games to allow Botvinnik to win the Championship. It’s speculated by some chess historians that the Soviet chess officials gave Keres strong hints that he should not hinder Botvinnik's attempt to win the World Championship. Botvinnik only discovered this about half-way though the tournament and protested so strongly that he angered Soviet officials. These are mere speculations and Keres probably did not deliberately lose games to Botvinnik or anyone else in the tournament.

So, let’s look at a few of his games at Zurich 1953, where he finished in second place ( tied with Bronstein and Reshevsky). We see in round 3 with Black against Szabo, he takes immediate advantage of a misplayed opening by Szabo. In this QGA, Szabo plays an early Qa4+ on move 5.

In Round 5 against Stahlberg, Keres turns a novelty of a QGD into a battle of isolated Queen’s pawns, first to himself with an advantage then to white to exploit the problems. He handles the initial IQP and transforms it to a positional advantage a little later by reconnecting with a pawn chain leading on e4. After White inherits the IQP, Black blockades it appropriately and the d-pawn eventually falls giving him a slight advantage in the endgame. This very difficult Q+P endgame could have been drawn under exact play but Keres finds the right plan: getting the King to the queen side and force an exchange of queens. This was a very instructional game on IQP’s.

In round 23, he tries the same Novelty out on Geller who has had a chance to prepare for this and basically wins with a series of little combinations. Geller prepared a sharper line that intended to open the position into a tactical game. The first mini combination allows Keres to castle against all odds because he has some good tactical shots in his position. A second combination evolves around a similar theme from a previous game
starting with Ne4. Then, a third combination allows Black winning simplifications. The final blow was made simple with a back rank threat.

Against Petrosian in round 16, we see a shuffling of a King’s Indian system. Keres plays Bf4 to stall e7-e5 and provoke Black to expand the queenside instead. Both sides tend
to make natural and necessary moves in hopes to draw the other player into a
weakness. Petrosian makes the first inaccuracy allowing Keres an attack up the
h-file.

Lastly, we look at round 28 and another case where after a slight inaccuracy, Gligoric falls to Keres attacks. Gligoric makes five pawn moves in a row in the opening and was able to hold off the first wave of attacks at the cost of the queenside. This left the door wide open for Keres to come waltzing in with the queen.

cause more suspicion to being under pressure to NOT to win these events. He successfully led the Soviet team in the Chess Olympiads to seven consecutive gold medals and five board gold medals which broke a record when he had four straight board gold medals.
He continued to play strong in several events over the next couple of decades with championships earned in Beverwijk 1964, Buenos Aires 1964, Hastings 1965, and Bamberg 1968 to name a few first place finishes.
By the 1970’s, he was still placing in 2nd and 3rd place in various events up until the time of his fatal heart attack in 1975 where he dies in Helsinki while returning from a tournament in Vancouver which he indeed won.

He was one of few players to have a plus score against Capablanca as well as Smyslov, Petrosian, Karpov and Tal. He played 10 world champions beating nine of them from Capablanca to Fischer (he drew with Karpov). 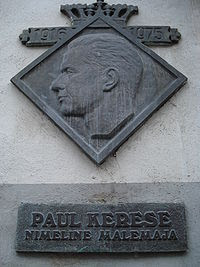 "Well, I believe that Keres failed in this respect because he lacked the killer instinct. He was too mild a person to give his all in order to defeat his opponents. He took everything, including his chess, philosophically. Keres is one of the nicest people that I have ever had the pleasure of meeting. With his friendly and sincere smile, he makes friends easily. He is goodnatured and kind. Yes, he loves chess, but being a human being is his first consideration. In addition to chess, Keres is interested in tennis, Ping-Pong, swimming, and
bridge."

Posted by BlunderProne at 7:37 PM

I believe Keres had a change to become World Champion if he hadn't lived in the Soviet Union. The rumours of him being under the watchfull eyes of the Soviet authorities is in my eyes more then a rumour.

I doubt i said it before but would you see in these days a tournament like Zurich lasting more then 25 rounds? I doubt todays players would agree to play in such tournament.

I have been awaiting with interest this installment of Zurich '53. Keres is my favorite player of all time, perhaps because his book of his best games was one of my earliest chess books, and it captivated me completely.

It doesn't make sense to me that Keres had a positive score against those other players, but lost so many to Botvinnik.

My intutition would tell me that Botvinnik found some sort of character flaw in Keres OTB play. Perhaps he found that Paul would become impatient in some situations, and then Mikhail strove to achieve those positions quickly, drink his entire thermos of coffee, and spend gobs of time on the positions that made Keres nervous, or simply channeled the game away from Keres style.

There is probably some sort of chess explanation for it. Perhaps he felt that only a win or loss would be honorable. Of the few Keres games I've seen, he plays more "hell bent for leather" than any of those other players at that 1953 Zurich tournament, IMHO.

I only collected a couple tournament books because I found a boatload of games that ended in peaceful draws. Keres didn't strike me as having that "draw gene". hehe.

See, I knew that Keres was a wimp--he just didn't have enough will to win.

He really could have learned some lessons from a real winner, like Yankees star Erik Jeter.