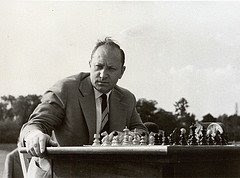 Most of you probably have not heard of Laszlo Szabo, the Hungarian Grandmaster unless you read about his name in the tournament book. More should be written about this attacking player. Born in Budapest on March 19, 1917 made him 36 at the 1953 Candidates match in Zurich. His early claim to chess fame was how he startled the world winning the 1935 Hungarian Championship at the young age of 18 ( At that time this was a remarkable feat). Some speculate that the young Laszlo studied under Maroczy.

Let’s look at some of his highlights at Zurich. In round 5 . He soundly beats Bronstein with a skewer tactic that follows a deflection of Black’s queen. This starts out as an Old Indian defense but Szabo early on takes him out of the comfort zone. Szabo begins a king side marauder run with pawns and finishes with some nice tactics.

The next round he plays the black side of the Open Defense of the Ruy Lopez against Gligoric. They pretty much follow a book line until about move 14 when Szabo takes advantage of white’s subtle neglect of a Queen’s side pawn advance. During the middle game, Gligoric was trying to force a win in a positional game that allows Szabo to offer a queen exchange and took it into an end game with a good bishop over a bad one. It was all a matter of simplification and technique ( I always wanted to say that!)

He beats Stahlberg in round 13 using good judgment in the Smyslov variation of the Grunfeld defense. He was well prepared for a line that allowed black the freeing move of c5 and regained the center. Stahlberg underestimated the weakness of his second rank and falls. One of the techniques that stood out in this game was how Szabo was able to taunt his opponent into advancing a pawn in front of his king with mere threats. Once the weakness was created, he was able to zoom in and exploit it.

There were several draws that were of no technical merit. An exception was round 19, his draw against Reshvesky. Unbelievably, both grandmasters miss this mate in 2 on move 21. 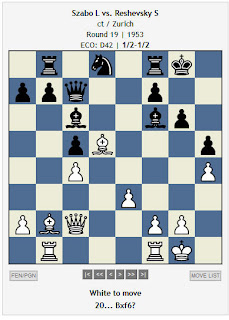 Szabo plays 21 Bxf6 Can you see a better move? A few moves later, Szabo missed another forced mate and ends up accepting a draw after a long contemplation. He was crushed and it probably affected his play for the rest of the match.
His draw in round 22 with Taimanov was interesting in that I think he had a win in this rarely seen double stonewall positional choreographic dance. Taimanov, resourceful as he was, had a perpetual check in hand to salvage the game with a ½ point after Szabo misses another forced win..

he rallies in the last couple of rounds. In round 29, his forth win came at the hands of Boleslavsky. As Black, he plays a pseudo Benoni-English and aggressively goes after the knight on c3. He exchanges queens early to grab a pawn and then the game takes on a Divide and Conquer aspect as the endgame with balck’s better placed pieces prevails.

Finally, in Round 30 he beats Kotov in a R+P endgame with possession of the more active rook. Despite Kotov finding a way to activate his rook, it was too late. 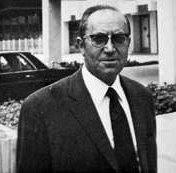 His family donated his entire chess library and papers to the Cleveland Public Library under the John G White Chess and Checkers Collection ( notably the largest chess library collection in the world with over 32,000 volumes of books and periodicals).
Posted by BlunderProne at 9:33 AM

I had never heard of him, but that dude could play! Thanks for the annotated games. :)

Heard the name but never saw some of his games. Thanks for that!

i'd like to see you analyze szabo vs fischer game.

In the Taimanov game, Taimanov makes a horrible blunder with 38.Qf5 instead of QxB+, which gives White the edge. I had to play through it just to see if the game was recorded right.

Were these guys fried by round 22, or is it just me? It could be insane time-trouble, as often happened before move 40. There were some players even in those days who went into extreme time-trouble before move 40. I think Reshevsky and/or Nimzovich may have been two of them, perhaps Taimanov or Szabo were frequently as well.

Taimanov is usually a great player. 21. axb wins the b-pawn, and even Crafty gives it the nod, that is like a full point difference between 21. a5. At least Szabo I can say perhaps he was intimidated, maybe they both were(?)

Please correct the game/move score. It is 33. Bf5, not 33. Bf7 (which leads to a comical result anyway as Black is up +18 at one point, according to Crafty).

I am looking at the actual tournament book of Zurich 1953. The game does seem to get brilliant for both sides around this point and thereafter, and Bronstein correctly points out a missed win by Szabo on move 48.

Thanks Linuxguyonfics. What a friggin hiccup that was. When I analyzed the gaem the correct move order was in place. I had a system issue when that game was opened and the only thing I can think of is that somehow affected 33...Bf5 in that game.

It's corrected. Thank's for beta testing :)

The funny thing is that the Dover edition tournament book reads:
38. Qf2:f5 Qg5:e3+

I guess it's positional notation, or something like that, because algebraic would be 38. QxB. There are no 'x' capture marks in the game scores, just to the coordinate of the landing square. This would make replaying the game more prone to making that sort of mistake.

The Dover ed. notes are a little better. The ones you give are Bronstein's, but somewhat cleaned up from Jim Marfia's Russian translation, and a little bit of the message seems to have been lost in each of his comments on your gamescore.

Kasparov loved this book, which is interesting because Bronstein does have a bit of a subjective take on things (which is hard not to notice, if you've followed Bronstein). I could have met him once, so I sort of regret it now that he has passed.

I met Gufeld and had him autograph a book, he played in some tournaments in Los Angeles. It's funny how so many of them came here at some point. Could have met Karpov in Vegas, etc., but now the heyday of chess is gone and so are some of these personalities.

It's funny how this book sort of immortalizes Szabo. hehe. He actually ended up in 12th place, ahead of Gligoric (surprising), Euwe, and a much more distant back Stahlberg.

@linux: Thanks again, your comments add to my understanding as well as adds to the overall experience for everyone. I mirror this as well on chess.com and a discussion came about on how Szabo was responsible ( negatively) for Pal Benko's deflection.

As for the comments, I paraphrase mainly because 1) copywrite laws and 2) it's not my intent to copy the book here only the essence.

Again, this is an exercise for ME to work on my positional understanding. I import a raw PGN database of the event with no annotations. I play over the game and make my own comments and variations ( mine begin with GD: and where Bronstein's variations are different, they begin with DB:). Then I look at teh book and add Bronstein's comments and variations where they make sense. It's like taking a lesson form Bronstein himself but in a message in a time bottle sort of way.