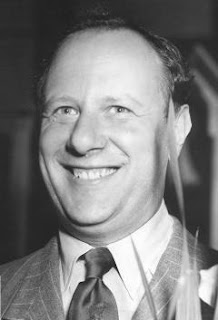 Born on June 9, 1919 in the small Ukrainian township of Zolotonasha, Isaac's chess career did not commence until the family moved to the nearby city of Dnepropetrovsk. Here he taught himself the game and then participated in local junior tournaments. He was the schoolboy champion of Dneprpopetrovsk in 1933. Three years later he came in third in the final of the All-Union Junior Championships of 1936 held in Leningrad.

In 1938 and 1939 he won the Ukraine Championship which qualified him to USSR Chess Championship and earn his national masters title at the age of 20. He also earned a degree in philology ( comparative linguistics). His hey-day came in 1945 when he took second place behind Botvinnik. He qualified for his first interzonal which left to the Candidates match in 1951 in Budapest . He was the only undefeated player for most of that match. At the half-way stage of 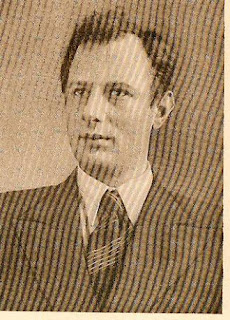 the Candidates, Bolealavsky was in first place with 6 points out of nine games, ahead of Smyslov, Keres, Kotov and Flohr. With just two rounds left to play, he was still in first place a full point ahead of Bronstein. Boleslavsky drew his last two games, but Bronstein won both of his games and matched his score to tie for first. The tie was split by a match of twelve games which was drawn as well and had to extend to 14 rounds before Bornstein won and became the challenger to Botvinnik.

He earned his international Grandmaster title in 1950 during all the activities above. He became Bronstein’s trainer and second in 1951 in preparation to the match against the then world champion, Mikhail Botvinnik.

He qualified for the Zurich 1953 because of his finish at the 1951 Candidates match. Some argue that in Zurich his style changed to a positional rather than the some of the spark seen in the previous candidates cycle. Sure enough, he has a litany of 19 draws and only 4 wins.

Most of the draws were not that inspiring, many being very early draws. He was playing rather cautiously. He beats Kotov twice. The first time in round 3, as white, he gets an IQP position that allows him to grab an advantage over Kotov. After a flurry of exchanges, he gets his bishop 3 squares in front of Kotov’s knight which paralyzes it. 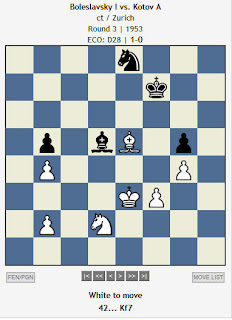 In round 18, he faces Kotov again in a King’s Indian defense. Bronstein feels that Kotov was a little too relaxed allowing Boleslavsky to grab the initiative. He wastes no time and provokes white to advance the e-pawn only to go after it with a vengeance. It turns out to be the key to the kingdom as he knocks it down.

In round 4, he beats Geller with the black side of a Queen’s Indian. He shows the power of the dual bishops against a pawn center. Geller targets potential weaknesses in Boleslavsky’s position on d6 and d7 but this “distraction” only gives Boleslavsky the initiative to launch an all out attack on the king, the pawns in the center and opening up channels to bring in the cannons.

His last win comes in round 30 against Euwe. As Black, he plays an old line of the King’s Indian. Euwe allows him to start a king side attack with the h-pawn. Euwe tries to compensate on the queen side but this turns out fatal. Left with a weaker position, Boleslavsky uses the same paralyzing technique with his bishop against Euwe’s knight as he did against Kotov in round 3.

Boleslavsky became assistants ( seconds) to Smyslov, Petrosian and Bronstein in other matches. He was captain of the USSR’s students team which won the World Championship in 1968. His legacy remains in his contribution to the King’s Indian Defense. Hans Kmoch in his book Pawn Power in Chess calls the Kings Indian configuration of black pawns on c6 and d6 (especially if the d-pawn is on a semi-open file) "the Boleslavsky Wall." He also has a variation in the Sicilian Defense named after him (1.e4 c5 2.Nf3 d6 3.d4 cxd4 4.Nxd4 Nf6 5.Nc3 Nc6 6.Be2 e5).

His daughter, Tatiana ( born in 1946), married Bronstein in 1984, She was 22 years younger than Boleslavsky’s long time friend. He died in Minsk on February 15, 1977, at the age of 57, after falling on an icy sidewalk, breaking his hip and contracting an fatal infection in the hospital.
Posted by BlunderProne at 9:39 PM

Never heard of this wonderfull chess player. Didn't even know he was so close to challenge Botvinnik instead of Bronstein.

Wow, more hidden treasures from the Soviet bloc. Very interesting, and also it is funny that his daughter married his buddy. Bronstein must have been either really rich, or a really good guy.

I have known of the Boleslavsky variation for 35 years, but never knew a thing about him until now. Thanks!

I must mention though that I HATE the Boleslavsky sicilian. Be2 is WEAK WEAK WEAK.