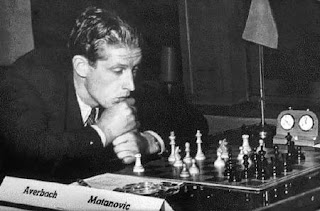 Born February 8, 1922 in Kaluga, Russia, Yuri Averbakh got noticed in the chess scene when he won first place at the 1949 Moscow Championship. He became a grandmaster in 1952. I couldn’t find much more about his earlier chess life. He would have been 31 at Zurich. Becoming a grandmaster at age 30 was fairly common back in this period.

Looking over his games at Zurich 1953, it’s surprising he finished in 10th place ( tied with Boleslavsky) but this may be a result of the 17 draws, a lot of them being rather quick. His playing style was rather solid and may have contributed to the numerous draws because in his own words in commenting about his plus score against Nezhmetdinov :

“If Nezhmetdinov had the attack he could kill anybody, including Tal. But my score against him was something like 8½–½ because I did not give him any possibility for an active game. In such cases he would immediately start to spoil his position because he was looking for complications."

“No possibility for an active game” in this match meant a lot of drawn games with quite a few early draws. This solid style would flourish if his opponent would attempt to find complications. He’d transition the opening to a middlegame that targeted a favorable endgame where he was like a machine.

Paul Keres in round 2 fell prey to this advanced thinking style of play. It starts out as a Nimzo –Indian but Averbakh uses a slight move variation on move 9 that gears him up more for a solid endgame rather then dynamic middle game. White tries to break open the center and it costs him a pawn. That’s all it takes for Averbakh as he reduces the forces to a quick endgame of rooks and minor pieces with an imbalanced pawn network.

He beats Euwe twice. The first time in round 11 on the Black side of a Nimzo Indian. Here, the formula had Averbakh gaining some space on the queen side where he advanced the pawns as far as he could blocking in Euwe’s dark squared bishop before transitioning to an endgame. Euwe tries to counter with an attack on the king side but only gets forced into a series of major piece exchanges. With the more active pieces, Averbakh maneuvers the knights over to where he banked his pawns on the queen’s side, sacrifices a knight and facing 3 advanced passed pawns against a weak bishop, Euwe resigns. 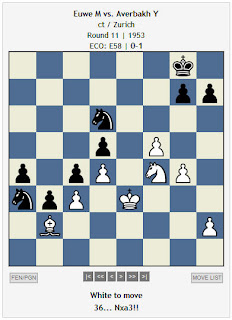 He meets Euwe again in a later round ( 26) and plays the white side of the Nimzo-Indian. The struggle in the middle game is white’s potential of advancing e3-e4. Euwe managed to block in Averbakh’s dark squared bishop ( as payback for round 11). At a crucial point in the game, Euwe exchanges down but that actually leaves Averbakh with an endgame edge with better placed rooks and king position.

Round 21, against Taimanov shows us a different style of play from Averbakh. He shifts gear and goes after an uncastled king aggressively in this open Sicilian. He starts with a counter-attack on the queen’s wing and transposes it to a central attack with a surprising e4-e5 pawn gambit. It opens the position as he sacrifices a bishop only to get the material back with interest a few moves later. 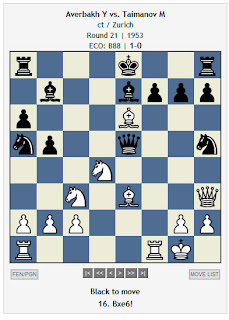 His last win is the next round with Najdorf in a classic struggle with Averbakh’s style of play. By move 12-15, he has already got the position he wants for a favorable endgame with his knight versus Najdorf’s bishop. He fixes the white pawns on the color of White’s bishop all the while creating a great outpost. The queens are exchanged by move 16 and on move 21, Bronstein comments: “ White’s position is unbelievable” and remarks about the weak pawns, the passively placed bishop and the “gaping hole” for the black knight on c4.

Five wins, 17 draws scores him 13 ½ points placing him even with Boleslavsky.

In the following year, he wins the USSR Chess Championship ahead of Korchnoi and Petrosian to name only a couple. In 1956, he ties for first in the same Championship wuth Spasky and Taimanov but lost in the play-offs. He did qualify for the 1958 Interzonals at Portoroz but ended up in a tie for 7th place, half a point short of placing him in the candidates match. 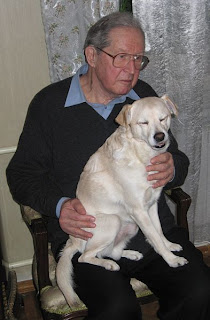 It’s no surprise that Averbakh published over a 100 endgame studies, many of which have given notable contributions to endgame theory. In 1956 he was given the title of International Judge of Chess Compositions and in 1969 became an International Arbiter for FIDE. He edited a couple of soviet chess journals and a four volume anthology of endgames. He also published science and science fiction stories for the Soviet publication ‘Znanie-sila’ ( Knowledge is power).

His daughter Jane, marries Taimanov (after his divorce from Lyubov in the early ‘70s and before he later marries Nadya… but more on this stud later). He's still alive today at age 87.
Posted by BlunderProne at 2:46 PM

One of those great players who lived in the shadow of those other great russian players. Russian chessworld has had so many good players and i hate to say this but i only know a few of them.

I wonder if there is a book about the history of Russian (USSR) chess with all stories about lesser to not known russian grandmasters? Probably is a 10 books series. :-)

That's one of the great things about Blunderprone's history--learning about all these great players I've never heard of before.

I disagree with BDK on his improvement plans.

BP, I just got the 1953 Zurich Tournament Book (Bronstein). I made it all the way through the first game :-) I look forward to getting your 1953 summary in CBV format.

Hey Blunder - shoot me an email when you get a chance and we can talk about the shirts: john@endgameclothing.com