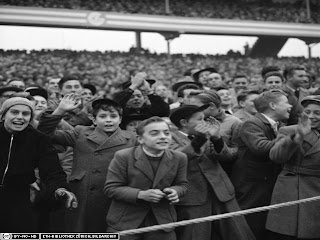 As the gull wings of the De Lorean swing open, I find that it’s late summer in Zurich, Switzerland 1953. The dawn of a very famous International Chess Tournament is about to commence. Since this is a FIDE organized double round robin Candidates match to beat the world Champion, Michael Botvinnik, there were 8 players from the 1952 Stockholm Interzonal match; Kotov, Taimanov, Petrosian, Geller, Averbakh, Ståhlberg, Szabo, and Gligoric who qualified for this event. Seven more players were seeded due to past performances. Bronstein, Boleslavsky, Smyslov, Keres and Najdorf were the best in the previous candidates’ tournament in Budapest 1950. Reshevsky and Euwe had participated in the world championship of 1948.

Eight rounds were played in the Kirchgemeindehaus in Neuhausen am Rheinfall (Pictured on the right)from August 30 through September 12 and the remaining twenty-two rounds in the Kammermusiksaal of the Kongreßhaus in Zürich (pictured on the left) from September 13th until October 23rd of 1953. A total of 30 rounds will be played in approximately 2 months. 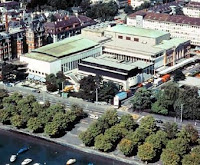 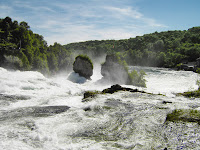 In this time period, the Candidates Tournament was a triennial chess tournament organiszed by the world chess federation, FIDE, as the final contest to determine the challenger for the World Chess Championship. The winner earns a right to a match against the incumbent World Champion.

Most of the serious players I’ve interviewed claim that studying this tournament helped them reach beyond a rating of 2000. Considering the level of play of a Candidates match, I can understand how this might help one achieve a better level of understanding and appreciation of the game. Bronstein’s narrative is really what makes the tournament book stand out. He comes out and says that his book is more of an essay for middle game play.

In the Preface, he describes the evolution of the openings leading up to the event. He takes Tarrasch’s positional ideas and turns them on its head. Claiming Dr. Emanual Lasker had it right when he played “ second rate” moves to entice his opponent to a more dynamic game only to take advantage of the hole his opponent would create chasing a faux weakness.

“ We might give ourselves weak spots and weak pawns, in order to distract our opponent; give up open lines, in order to save the rooks for other, more promising plans; or mount an attacking demonstration, in order to hide our real intentions.”

When I first purchased this book and tried to assimilate the ideas I was in over my head. I needed to go back to the romantic period of swashbuckling chess of the London 1851 tournament to get my bearings. Moving to the Hastings 1895 helped me see the evolution of positional ideas to the closed positional styles of that period. My most recent study of the New York 1924 hypermodern era helped me understand the different approach to positional ideas with the asymmetrical positions and flexibility. All very good preparation necessary for me to understand the magic I am about to see with new eyes.

For this event, I have no continuance factor like my previous events following Henry Bird from London 1851 to Hastings 1895 and Dr. Lasker from Hastings to New York. Part of the reason is that New York had an “older” set of players that were no longer in competition or living for this event. The closest I get is with Euwe and Stahlberg. Max Ewe was the Dutch Champion in 1921 while Gideon Stahlberg was the Sweedish Champion around that same time period. Nether were qualified for the New York 1924 event. Incidentally, I start the series with both of these players because, they finished 14th and 15th. All the other players were either children or not born in time to compete in New York 1924. 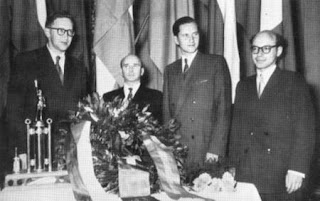 L-R:Smyslov, Reshevsky, Keres and Bronstein
If you followed my previous series and enjoyed those, I hope you will find this series just as informative and moderately entertaining.
Posted by BlunderProne at 9:07 AM

I'm really looking forward to your series on Zurich 1953. An awesome event and an awesome book!

Excellent, can't wait! Speaking of chess in Zurich: the Zurich Chess Society, the world's oldest chess club, is celebrating its 200 year anniversary come August and has organised a spectactular line-up of events, including a 200-game simul with no less than eight World Champions. Their website can be found here.