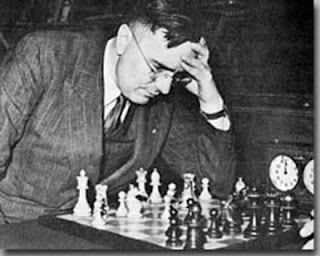 Born near Amsterdam on May 20, 1901, Dr. Max Euwe earned his doctorate in Mathematics at the University of Amsterdam in 1926. He taught math in Rotterdam and later in Amsterdam. Along the same lines as Dr. Lasker, he published a mathematical analysis of the game of chess using the Thue-Morse Sequence to show that the then current official rules did not exclude the possibility of infinite games.

Dr. Euwe won every Dutch chess championship he participate in from 1921-1952 and again in 1955 winning a record of 12 titles. Having a young family in the late 1920’s through the 1930’s, he could only play competitive chess during school vacations. This limited his opportunities for top level international events, but when he participated, he performed well.

"There's something wrong with that man. He's too normal." – Bobby Fischer

He was not a "professional" chess player yet he became a World Champion! Dr. Max Euwe became the fifth World Champion in 1935 after 30 games across 13 different cities around the Netherlands defeating Alekhine by 15.5 -14,5. This win gave a huge boost to chess in the Netherlands. I don’t like the debates that Euwe’s win over Alekhine was due to either Alekhine’s alcoholism or over confidence. I prefer to think that his fighting spirit, creativity, and ability
to not lose his nerve under tough positions was the edge he gained over the 4th World Champion. In 1936, he was in top form at Nottingham and again in AVRO 1938 finishing in 3rd and 4th place respectively and in both instances ahead of Alekhine.

Now, in Zurich 1953, we see Max Euwe at 52 making him the oldest contestant at this event who still has some spectacular capabilities and nerves of steel. In the first round, he has the white side of Kotov’s Benoni Defense. As White, he gets some space on the Queen’s side and doesn’t waste any time getting his troops deployed to the open terrain. Kotov, under pressure, decides to exchange a rook for a minor piece to allow for some feeble counter attack. With Nerves of
steel, Dr. Euwe weathers the temporary marauding raid by black and then continues squeezing the Queen’s side.

He wins his first brilliancy prize in round 2 as Black against Geller in a firey Nimzo-Indian- Rubinstein system. Had Black played a typical Queen’s side attack, Geller’s sharp pawn sacrifice on c4 would have had more of a sting. Black decided to use the Queen’s side as a means to establish lines of communications to attack White’s King. In the heat of attack versus counter attack, Dr. Euwe offers a rook to decoy the White queen deep into the rears of his own back rank! But, the rook sacrifice is vindicated as Black developed an unstoppable mating threat on a weak King. ( Diagram) 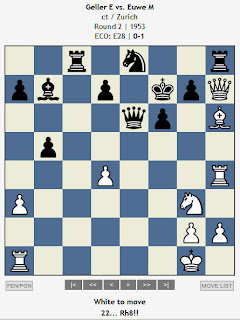 I looked at several of Euwe’s draws and decided to comment on the round 6 Bronstein game ( he drew both games against him). In the notes inside the game, I tried to capture Bronstein’s views and comments about how both sides were sacrificing material to “assail” the other’s king. One, in an attempt to draw the king to the sixth rank, the other making a run for the cowering king in the corner with a weak back rank. The game ends in a draw with a Queen versus two rooks and a time scramble on both sides. They come back after the adjournment and agree to a draw.

He beats Taimanov in round 8 with a Nimzo-Indian defense as black. In an over-emphasis of maintaining the bishop pair, White allows black to complete his development which allows Dr. Euwe to attack first. White’s bishops were imprisoned behind locked pawns. Black then was able to turn the development edge into longer term structural issues for White. White had one saving grace in the form of a passed d-pawn. However, he ignores the significance and falls prey to the aggressive rooks of Euwe.
His second brilliancy prize was found in round 9 as White against Najdorf. Black allows white to expand in the center in this modern defense. Euwe decides to push it to the extreme and advance the d-pawn to d6 which cuts off communications for Black’s King and Queen side. This allows him to follow through with a King side attack starting with h4 and offering a knight on g4. (diagram)WITH A ROOK DOWN! 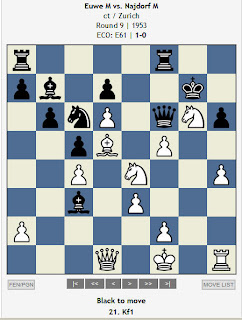 White continues this swashbuckling attack in a fashion seen 100 years prior with Anderssen vs Kersietsky. The astounding thing was that this was an intuitive sacrifice with no real forcing lines, only strong initiative and great attacking chances that pushes the king into submission.

His last victory I looked at was against Stahlberg in round 14 as white. This was a matter of dueling outside passed pawns and careful calculations. If you are looking for a lesson beyond Silman’s simplistic “fox in the hen house” approach to outside passers, then this game is worth a study . In the book, Bronstein includes some of Euwe’s analysis which I folded into the game comments. ( for reference, GD are my feeble analysis, DB are David Bronstein’s and those marked with ME are Max Euwe’s)

With the five wins, he draws 13 games to finish with 11 ½ points. This was his final major tournament. 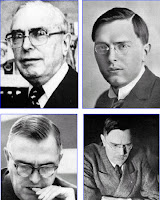 He played in a few more Chess Olympiads after Zurich through 1962 representing the Netherlands concluding a 35 year span on first board. In 1957, he played a short match with a young Bobby Fischer winning one game and drawing the other.
From 1970-1978 he was the president of FIDE doing what he considered was morally right rather than politically expedient. This brought him into conflict with the Soviet Chess Federation who felt they brought in a larger share of the budget and Soviet players dominated the world rankings. Presiding over FIDE during some of the most turbulent times with Fischer and the soviets.

His legacy is found in several books he authored. One in partcular, “ The road to mastery” is still a popular book seen on the table of most book sellers at large events. His granddaughter, Esmee Lammers, has written a children’s book titled Lang Leve de Koningin (Long live the Queen). It is a fairytale about a young girl who learns to play chess and at the same time finds her father. Lammers filmed the story in 1995.
Posted by BlunderProne at 1:01 PM

Awesome stuff thanks again for a nice lesson. His 'Master vs Amateur' is wonderful.

PS On an unrelated topic, how do you approach it when white plays 2f4 against the Caro? It destroys me.

Max Eeuwe was the motor to spread chess not only in the Netherlands but also gave chess in Belgium a boast. Offcourse Belgium is still running behind the netherlands, chesswise (in every aspect) but we are slowly getting better and better if we can hope on the results of our most promising youth players.

At the end of his working carreer he also gave lessons at a girls college and loved doing so.

Being neither a drunkard nor a parent, not sure which one has the better excuse.

I am sure i left a comment here before but i didn't see it appear.

Max Euwe did much for chess in the Netherlands as in Belgium. His World Champion title gave chess a boast in these two countries although a bigger boast in his native country of the Netherlands.

In his later years (i think when he was already Fide President) he was a math teacher in a girls high school.

He was the best Fide President we have had so far. He approached it in a human way and wasn't affraid to go against the wishes of the USSR.

"I don’t like the debates that Euwe’s win over Alekhine was due to either Alekhine’s alcoholism or over confidence. I prefer to think that his fighting spirit, creativity, and ability to not lose his nerve under tough positions was the edge he gained over the 4th World Champion."

You probably already heard, but just in case you hadn't they are coming out with a new edition of Bronstein's "The Sorcerer's Apprentice" sometime next month.

Would have added this and his Zurich book to my collection but I wanted to finish reading the chess books I already have. Glad I waited.

Great stuff once again. I always liked Euwe, he always seemed normal to me.

As well as being a great chess player, Max Euwe's legacy also includes, a square named after him ( Max Euweplein in Amsterdam ), on which there is a large outdoor chess set, nearly always in use when I pass by.

Not too many players have that !

Also on that square is the Max Euwe centre. You can guess what goes on there (http://www.maxeuwe.nl/en/index.html). This week was a review of Corus 2010, and soon Yasser Seirawan is giving a weekend lesson. Can't be bad...

Finally, the bridge leading into Max Euweplein is (I think, its not identified on maps :) named after Jan Hein Donner, another Dutch chess master, possibly a bit more "exuberant" and outspoken than Euwe. His chess columns ( & views ) are collected in his book 'De Koning', published in English as "The King:Chess Pieces" - much fun !!

See http://signalman90.blogspot.com/2010/02/max-euwe-too-cold-to-play-outdoor-chess.html for a picture of what it was like today. No chess players, but it was a Thursday, and exceptionally cold !