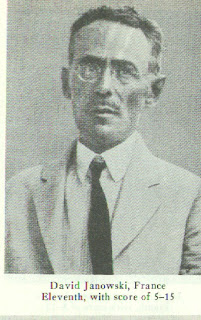 I’ll begin this series with the eleventh place finisher ( last) Dawid Janowski, the representative from France who was 56 at the time of this event. He’s a good cross-over point from the

Noted by both Alekhine and Capablanca, Janowski’s play is inconsistent to his actual strength. A little passed his prime, he lost a lot of games due to poor opening strategies. That’s not to say he played badly in all his games, rather, in some games, he took unnecessary risks as he tried to transition to a playable middle game.

As an example of when his idea worked, in round one against Jose Capablanca, he launches a novelty in the QGD that spooked the stronger player into launching a knight sacrifice to play to a forced draw so as not lose. 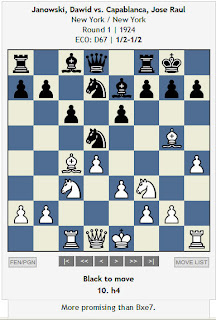 In round 5 as Black against Ed Lasker ( two Lasker’s at this event… one, the BIG Dr. Lasker, the second, a distant relative Ed.), he manages to get behind in material ( pawns) out of the opening. He’s a strong defensive player and holds his ground. Later, he sacrifices a Bishop to gain entry to the weakened King and wins the queen and the game.

In round 7 against Bogoljubow, he inherits a cramped position out of the opening but has the bishop pair. Janowski had a reputation of being quite deadly with such a pair and proves true after a series of exchanges to free his game. He sets up a nice deflection tactic that squeezes out a win with vice like pressure on the 2nd rank. 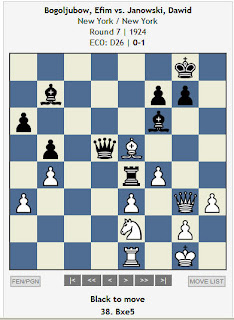 This is probably his best game of the event and the one to watch.

In round 10 against Tartakower, a proponent of the Hypermodern defenses, he gets behind in material and is faced with an advanced passed pawn and strong knight outpost. In a do or die scenario, he exchanges his rook for the invasive duo and frees his game enough to later pull off a draw by repetition in an otherwise lost game.

As White against Maroczy in round 17, he gambits a pawn to grab a lead in development and initiative early on but then seems to squander it as he drops a central pawn. A misstep by Maroczy allows him to recover gracefully as he gets an advanced knight out post and traps his opponent’s rook and goes on to win the game.

Comments on his playing style by others in the tournament : ( source Wiki)

Janowski played very quickly and was known as a sharp tactician who was devastating with the bishop pair. Capablanca annotated some Janowski games with great admiration, and said, "when in form [he] is one of the most feared opponents who can exist". Capablanca noted that Janowski's greatest weakness as a player was in the endgame, and Janowski reportedly told him, "I detest the endgame."

American champion Frank Marshall remembered Janowski's talent and his stubbornness. In "Marshall's Best Games of Chess" he wrote that Janowski "could follow the wrong path with greater determination than any man I ever met!"

Edward Lasker in his book Chess Secrets I Learned from the Masters recalled that Janowski was an inveterate but undisciplined gambler who would often lose all of his chess winnings at the roulette wheel.

This was not his best match as in the recent past ( relative to 1924), he actually tied for 1st place in New York 1916 ahead of Capablanca and won in Atlantic City in 1921. It appears that New York 1924 became his swan song as he died 3 years later of tuberculosis.
I'll remember him for his tenacious style of play. Despite not playing the top move in a given position, he always gave his best effort to sustain the choice he made. ( Better to have a bad plan than no plan at all).
Next Up : Ed Lasker

Posted by BlunderProne at 7:02 PM

"Dawid Janowski, the representative from France "

Hmmm, always thought Janowski was from Poland. Did he emigrate to France after the first world war?

Chesstiger, Yes Janowski was of Polish decent but moved to Paris in the early 1890's ( right before Hastings 1895) where he took up residence. He frequented the Cafe de La Regence and only picked up playing serious chess in 1894 ( 1 year prior to Hasting's) and earned enough credentials to become the representative to France for that event.

Excellent work, yet again, with more fun to be had over lunch working over the games more closely.

I wonder if he knew Taubenhaus, who was daily at that cafe giving lessons (game 15 in Art of Checkmate).

A game they played is here:
http://www.chessgames.com/perl/chessgame?gid=1266431

It's a good thing Janowski wasn't born French. He'd have surrendered before showing up to the tournament.

Re: Rxe3. I don't know why the move looks so spectacular. All it's doing is uncovering a simple Queen-Bishop battery.

LE:
Meh! Considering he was behind in material with two pawns. Rxe3 not only gains back material but puts the right kind of pressure on the game to give initiative. This was followed up by BxB and RxP to gain back BOTH pawns and maintain a mating threat with the B+Q battery

BP: you are the man, finding that game :)

I'm kind of glad they drew.

Bad phrasing on my part.

But after seeing the move, it just seems obvious, and "should" seem less sparkling than it does. Of course, this means I would have completely missed it over the board.