"It has been said that man is distinguished from animal in that he buys more books than he can read. I should like to suggest that the inclusion of a few chess books would help to make the distinction unmistakable." 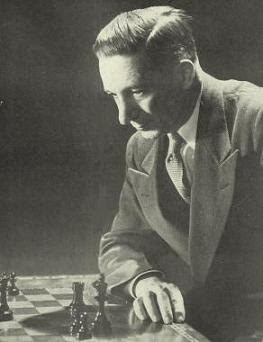 Edward Lasker wrote in his memoirs of the New York 1924 tournament as published in the March 1974 edition of Chess Life magazine: "I did not discover that we were actually related until he (Emanuel Lasker) told me shortly before his death that someone had shown him a Lasker family tree on one of whose branches I was dangling." Note, this was 1974. ( 7th cousins). He was born on December 3, 1885.

He was a remarkable man. With a Mechanical and Electrical Engineering degree from the

Technical College of Berlin, he invented the popular mechanical breast pump (U.S. Patent Office issued Patent No. 1,644,257 ) for nursing woman on the go as well as saving the lives of premature babies. His close colleagues teased him with the label “The Chest Player”. The invention made him some good money which allowed him the chess diversions. Who’s laughing now?

Along with Harry Nelson Pillsbury and other strong American Chess players ( Like Harry Lyman), Ed Lasker was also skilled at other games like Checkers and Go, publishing books on these subjects as well as chess.

Unfortunately, his performs placed him second to last ( 10th). He drew Alekhine both games. His round 10 draw with Alekhine, demonstrates his aggressive style as this endgame became a race to the finish. Alekhine, as Black, had an advanced passed pawn on the 2nd rank ready for the queening square, while Ed delivers a perpetual check to squeak a half point.

In round 6, Ed Lasker as Black, almost beats his distant cousin, Emanuel in a very dynamic Ruy Lopez endgame with Rook versus Knight. Emanuel got behind in the exchange as he fired off a dubious combination in hopes to gain some middle game edge with extra pawns on the king side. He held the position and slowly simplified the position through careful exchanges. Ed tried to secure the point but had to settle for the ½ point.

Against Tartakower in round 13, he was able to get the upper hand while Tartakower played several wasted queen moves as black in a QGD triangle defense. Finally, with a battery of major pieces centralized, he delivers a nice combination and wins the game: 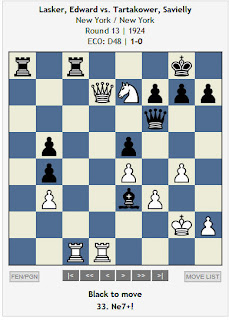 Another strong opponent was round 21 with Reti on the black side of well played Ruy Lopez. Transitioning out of the opening, Reti chooses to open up the king side with an f5 advance to break up the pawn center. This turned out to be a mistake as Ed was able to launch a nice King side attack. Tactically, he delivers this shot with his knight that wins the game.

Those were his only two wins of the event. He managed 9 draws against some tough competition but not enough to pull him out of 10th place.

Edward Lasker deserves a little more mention here. He died in 1981 at the age of 95! In his long lifespan, he bridges the players of the Hypermodern era with the modern players like Petrosian, Tal, Fisher, and Kasparov. Though he never made it to World Champion strength he did manage a few U.S open titles and continued to play and write chess well into his old age. 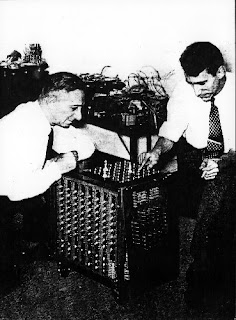 He was consulted by Claude Shannon at MIT who pioneered information theory and perhaps the first attempt at a chess computer made from relays. Claude went on to publish a paper on computer chess entitled Programming a Computer for Playing Chess.

Edward Lasker was an engineer and a chess player. So am I , what can I say?

Next up: Frederick Yates
Posted by BlunderProne at 9:32 PM

Edward isn't/wasn't a wellknown player so thanks for the extra information about him.

You wrote he wrote many books although he never saw one. Was he published outside the US?

He was my favorite author when I started playing.

I just found a bunch of his books from AbesBooks.com and have ordered them as I lost my stash of old books a long time ago :(

Thanks for that info on Ed. I didn't know all of these things about him. He was a remarkable man. Not to mention he had a great nickname :)

Great stuff. That's awesome that he helped Shannon with the chess machine!