Part 1: A self study in Sun TZu's Art of War and how it can relate to chess

An Introduction to a series 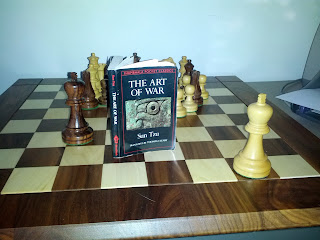 I have one of those Shambala Pocket Classic books I used to carry around at chess tournaments. I don’t know why I never really invested the time to read it thoroughly until now. I used to use it  to cover up my moves  on my score sheet and create an intimidating persona of “one who is ready for battle”.  A lot of good a façade does when you still loose to an 8 year old with a more intimidating alligator pencil case.

I needed direction as I am in a sort of holding pattern with a busy schedule but looking to get myself back in the game and blogging again. I like putting ideas out in this forum because in the past, it’s always been a good resource for debates and varying POVs. I just hope I can sustain this and not lose momentum especially if others don’t contribute to the discussion.

There are 13 chapters. I will try to use these as guides for upcoming posts.  Today I will begin with the first one.

To elaborate more on the first chapter, it explores the five fundamental factors (the Way, seasons, terrain, leadership and management) and seven elements that determine the outcomes of military engagements. Sun Tzu hypothesizes that by thinking, assessing and comparing these points, a commander can calculate his chances of victory. Habitual deviation from these calculations will ensure failure via improper action. The text stresses that war is a very grave matter for the state and must not be commenced without due consideration.
In tournaments, the grave matter for the state is losing games and rating points. To the serious competitive chess player, this is a high priority.

(1) The Way (also called Moral Law) relates to getting commitment and buy in from the people in the state to wage war. I relate to this concept of the state being people in my life and also my mental ambition to want to do this. If my wife and family are uncomfortable with my attendance at a tournament, I will be at a deficit going into the battle as some of my energy will be out of concern of my state. Likewise, if internally, I am not up for it, all bets are off. I’ve had those weekends and can see in retrospect that this is a critical factor.

(2 &3) The seasons relates to the weather conditions of the battle field. The terrain is related in this case as well.  (This is also referenced as Heaven and Earth in some text).  Since most tournaments are held indoors, I see this more as a condition of the venue. Are there wedding receptions in an adjacent ballroom? Is there a car show the same weekend? Does the room have a squeaky fan in the ceiling?  All are contributing factors that may distract me and my opponent. Going into this knowing what’s at hand, I can be better prepared. One more comment on terrain, “home turf” versus opponent’s board and pieces can also make a difference, especially if the black knights have glowing red eyes.

(4) “Leadership (or Commander) is a matter of intelligence, trustworthiness, humaneness, courage and sternness.” –Sun Tzu ( translated).
Humaneness is a virtue once held high for a ruling monarch. Having compassion and love for the people meant holding steadfast even more under greater opposition. I think it also boils to the quality traits of the player. Being ruthless to the enemy but protective of your own pieces does seem to remind me of “safety checking” before committing to a move.

(5) Management could also be understood as organization, discipline, chain of command or logistics.  I believe in a well regulated militia.  This could also mean how well you can fortify yourself at the venue ( supplies) and getting proper rest.

The seven elements that determine victory:

(1) Which of the two sovereigns is imbued with the Moral law?  (Harmony with the pieces and surroundings. In line with the Way)

(2) Which of the two generals has most ability? ( Rating is one indicator)

(3) With whom lie the advantages derived from Heaven  and Earth? ( Seasons, weather, terrain, conditions of the playing field)

(4) On which side is discipline most rigorously enforced?  (Which player is more apt to follow their own training, preparation and regimen?)

(5) Which army is stronger? ( This could relate to rating but also endurance in a long weekend boiler maker tournament.

(6) On which side are officers and men more highly trained? ( Having a coach is one thing, but how well are you able to put your studies to practice?)

(7) In which army is there the greater constancy both in reward and punishment? ( Playing at a consistent strength has been my downfall).

So there you have it, according to the first chapter, one can ascertain with almost certainty the outcome of a chess match after evaluating each player’s ability parsed through  the 5 fundamental factors and 7 elements.  Ratings alone, don’t always matter. The weaker opponent have be less distracted by the wedding receptions booming bass reverberating from the adjacent room while the stronger player may be going through a divorce.   You never know.

From the list of the above 7 elements, my weakest are the first and the seventh, but I think they go together.My own experience, if my “governess” is not in favor of me and the rest of the troops going to war, I know I come in at a disadvantage. Consistency in my play ( number 7) is the other one that often brings defeat into my realm.

I’d like to hear from others on how they fair on self evaluation of the 5 fundamental factors and 7 elements.

Posted by BlunderProne at 3:20 PM

Never forget that G/90 at least is a battle of the clock. Endurance is king, ability is queen - unless outplaying opponent by the equivalent of two rating classes in skill.