How I found this rabbit hole 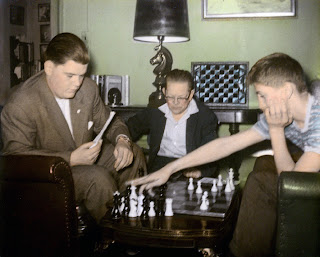 One of the books I got from dear old dad was Fischer’s “My 60 Memorable games”.  I vaguely recalled a blurb somewhere that Fischer had trained by studying in depth old classic games and was trying to relate some early Najdorf Sicilian to a broader database with older games. Then I got frustrated because nothing seemed to correlate nor did I want to sift through reams of games by Fischer and search on branched mainlines of the time.  I also couldn’t find “the Blurb”. I have a life outside of chess , so I googled  “fischer chess training.” The only reference I could find to the old games study was when he first trained seriously with IGM William Lombardy and the phrase: Eidetic Imagery and Total Immersion came up.

When I first encountered the phrase, I had NO CLUE what it meant. So I googled  that phrase and discovered it was related to a form of psychotherapy that relates to a true vision so vivid that the person can recall exact details and more.  Another description puts this in the category of  photographic memory. I am not doing it justice so read it for your self here.  It’s more than just a vivid memory, it sounds very similar to what native Americans would refer to  a vision quest where the answers unfold in front of the person unhindered by presuppositions or ones own preconceptions. It has to do with clarity and some sort of “ultra vision”.  William Lombardy at about the age of 17 dropped that hallucinatory thought on a fertile prepubescent Fischer ( age 11)back in 1954 before retiring from competitive chess in 1962 to pursue a career as a Roman Catholic Priest. You may want to reread that last sentence.  He wanted to teach the young Bobby how he was able to have a meteoric rise to competitive chess.

What does this mean for Chess Training?

Training a student for meteoric rise sounds suspiciously like “rapid improvement” techniques.  For all you Royal Knight Errant fans, you might recall the Michael De La Maza’s (MDLM) Rapid Chess Improvement in Chess plan?  This was a kind of force feeding method of increasing imagery to the memory in hopes to make your brain light up when a tactic is available through pattern recognition. ( Been there done the 7 circles of hell…so I can speak from experience here) This process may work varying degrees of success to a student depending on their learning style. One may be visual learner and gain some ground but if you don’t have a photographic memory the results are somewhat static and not long lasting .  When experts ( not me) talk about Eidetic Memory, they speak about it falling between the memory image and after image in one’s mind. For those with photographic memories, the after image is just as vivid as the first. The problem with MDLM’s method is it force feeds the memory imagery. If your learning style is auditory it makes it more difficult. Bottom line is that there is no silver bullet.

Can someone develop a better capacity for “After Image” in their memory?

Let’s face it, calculation holds the key to many advanced chess skills and this means the ability to “see” the board in one’s mind. Here is  nice article on learning how to improve one’s blindfold chess skills. I like because it  further elaborates on how different masters have approached or viewed the inner chessboard making me want to pick up YET ANOTHER chess book by George Koltanowski called, In The Dark. In the past, I played games against a computer on a lower setting to practice blindfold. I would start on the lowest level and play until I could win consistently before going to the next level.

DeGroot, who wrote a psychological study about Masters versus amateurs called Thought and Choice in Chess, noticed that masters do have a better ability to recall patterns in order of magnitude greater than the amateur. He goes on to mention the concept of “chunking” parts of the board visually and recognizing lines of forces from the pieces as favorable traits for the Master. He had also done tests on positional recognition by showing positions from real games for a few seconds and having the subject reconstruct the position from memory. Masters obviously scored better again. But when shown random positions, there was no significant difference between the ability to recall random positions from Masters and amateurs. There must be something “meaningful” behind the image we are committing to memory. Does this mean, Masters find more “meaning” in their games? As an amateur, as much as I love the game, I still am struggling to comprehend all the positions, and fear of being put into an unknown position dampens my ability to find true meaning.

Back to the entrance of the rabbit hole

Lombardy also mentions spending hours with Fischer going over “quality” games. The key operative is getting the right set of games to go over.  I would also add having the right coach early on that can help guide you to a stronger sense of meaning in the positions and nuances of the games is part of the “immersion technique” Lombardy mentions. I also think going over whole games to the point where you can commit them to memory is good. If you can then recall these after-images of strategic components or tactical elements during your own games then I can see how this might rapidly improve your playing strength rather than just making you good in one area of the game like tactics. For the amateur like me, its learning to set aside all the other elements outside the game ( mortgage, job, life) and being at ease when I reach an unknown position over the board. I wish I could afford ( time and money) for a coach but in the meantime, I search for meaning in some games I study.

See you across the board.

Unknown said...
This comment has been removed by a blog administrator.
7:41 AM

Leona said...
This comment has been removed by a blog administrator.
6:49 AM

This is a great post and deserves a long response(s) from many different people. I just blindfold went over one of Amos Burn's combos (while I was in the shower the other day), the variations.

Chess is very much a game of optical illusions if one is simply looking at the board. A lot of stuff can be hanging at first glance and I also notice that players of titled strength can compartmentalize, they can hold more, hang more on the board, and then get onto something else without having to resolve the situation held in their head. So they look for one more thing to dangle on the board and can hold in their head better when it must be resolved and when to dangle more onto it.