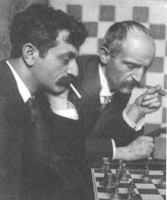 After a convincing World Championship rematch victory against Steinitz in 1897, Lasker seems to disappear from chess for a couple years. In that time same period, he managed to publish his book in 1897, Common sense in Chess, based on his 1895 lectures. In 1895, while recovering from Typhoid fever I must add, he published two mathematical papers in the Nature journal as he finished in 3rd place at Hastings.

The turn of the century sees Lasker finishing strong in a couple of major events after he took a couple of years off. We first see him in London in 1899, where he was in first place by a clear 4 ½ points! Georg Marco, a Romanian Chess master who came in 2nd place in the event ( and finished 17that Hastings a few years earlier), remarked: “ Lasker was there, Lasker I, Lasker the Unique!”


In this game against Tchigoran at the London 1899 event, we see Lasker not phased by White’s odd opening of 2.Qe2. Instead, he calmly maneuvers the came to a favorable position for Black where by move 26, he has a clear advantage and begins a forceful series of moves to close the deal.

The following year, he has another convincing victory in Paris (1900) with a 2 point lead ahead of Pillsbury. This game against Amos Burns, is a masterpiece of how Lasker took a slight lead in the opening and pressed on through the entire game.

In 1900, David Hilbert, a world renowned German mathematician of his day, became aware of Lasker’s published mathematical articles and encouraged him to register for his doctorial studies. Lasker attended the University of Erlanger-Nuremberg in the period of 1900-1902. He presented his thesis in 1901 and was awarded a doctorate in mathematics in 1902. His contributions to the academic world are now regarded as fundamental importance to modern algebraic geometry. 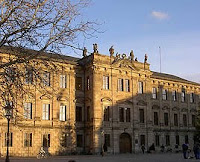 After accomplishing his doctorate, he appears back on the chess scene in 1904 and plays at the Cambridge Springs event. He doesn’t come in first place, rather, he ties for 2ndplace with Janowski. Frank Marshall came in first place. In this game here, Lasker ties with the first place winner. Marshall “the swindler” plays a gambit with a pawn down and manages to keep the edge against the World Champion to get the draw.
﻿
In another game at Cambridge Springs, the American ( with British roots) William Napier will most likely be remembered for this tough game he lost against Lasker for its tactical acumen by both parties. Lasker comes out of the opening with an inferior position as he didn’t spend a whole lot of time looking at opening variations and relied more on his tactical and positional skills to win the game. This causes the world champion to spend a considerable amount of time coming up with the right moves.

By move 21, Lasker only had 3 minutes left on his clock to make time control for the next 9 moves. This happens at one of the sharpest points in the game. The notes in the embedded chess game are transposed from Georg Marco’s through Fred Reinfeld. It’s simply amazing that Lasker can come from behind after an opening misstep and find just the right tactical play to restore balance. Lasker mentioned to the 26 year old: "It is your brilliancy, even though I won it." The young Napier was impressed at how Lasker kept his composure under such time pressure.

Next time we will look at Lasker defending the world title.

Posted by BlunderProne at 9:13 AM

I looked at the Napier game, a lot of suttle errors you wouldn't expect so much these days.

Black could have played ..Nh5, ..Ne8 is a bit of an over-reaction, still fine, yet not so modern.

NxBg7 is virtually a gimme response these days, not Ne7.

I looked at it with Crafty and the error was fxe4? followed by Bxb2?? Lasker should be winning for taking the Nc3 and losing for not taking it.

I looked at Be8xh5 first, then found a more positional move, but I overlooked one thing, White has to take on h5 where it's great or horrible, no advanced calculation required. One reason, material, other replies lose too much of it and that move takes at least a pawn.

The mate threat started to look obvious, but you have to admit that Lasker simply outplayed his opponenent and aside from playing the opening like he was without having much experience, still deserved the win. Interesting game to analyze.

I'll say why I think Napier lost that game, he couldn't stick with a plan, one plan.

This isn't a smorgasbord, it's a chessgame. I've done the same thing myself, refrained from making good moves because I only got one game to try to get everything in, and I wanted to see more possiblities, and....a lot of chess is just about how one accepts their fate, you get to pick a line and the rest is reams of analysis which never gets played or ends up in opening book sidenotes.

George, it's great to see you putting out this wonderful chess history material. I have been away for some time.

Dept. of FWIW: I reopened my old chess blog, minus the politco/philosopho balthering, at Robert Pearson's Chess Blog.

Marco wasn't in the field at London 1899. The second-place finishers were Janowski, Pillsbury and Maroczy. Marco finished 7-9 at Paris the following year.

I didn't realize Lasker didn't get his doctorate until 1902 -- interesting to know. Anyway, great website!