In the last post, we saw how Dr. Lasker, while multitasking, was able to maintain his World title and still have strong finishes at top tournaments. After the Cambridge Springs event in 1904, Lasker’s appearance at tournaments became increasingly more infrequent.

With Frank Marshall’s first place victory at Cambridge Springs in 1904, it only stood to reason that he challenge Lasker for the World Championship. In 1907, this match finally took place but it became clear early on that the American master was far from Lasker’s equal. Despite his aggressive style(…or perhaps because he was too aggressive?) he lost games and drew seven against the World Champion.

Below is one of the games where Lasker has an incredible endgame combination.

Following this Match, Tarrasch challenged Lasker for the title. Reading the accounts of the banter that went back and forth, I could not help think of the similarities of two World Wrestling Federation trash talking each other before a “fixed” match. Tarrasch, who firmly believed that chess was governed by a precise set of principles, viewed Lasker merely as a “coffee house” player who wins solely by his dubious tricks. At the opening ceremony of the match, Tarrasch commented: “ Mr. Lasker, I have only three words to sat to you: check and mate!” Lasker’s best response was winning the match against his arrogant rival. Here is one game which showcases that Lasker is more than a coffee house trickster.

Because there is too much material in this series, I will briefly touch on the Match against Janowski. This started with a short drawn match in 1909 ( 2 wins and 2 losses). Several months later, it was followed up with a longer, more decisive match in Lasker’s favor. Lasker was more prepared for Janowski’s attacking style. More prepared, the attacks proved to be premature and left him vulnerable. There is a historical debate whether this was truly a World Championship match. In 1910, Lasker agreed to a “revenge” match under the guise of World Championship Match in Paris. Lasker won this with 8 wins, three draws and no losses. Next victim please. 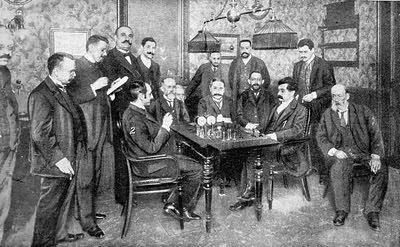 Now we enter the period of one of the most dramatic trial of Lasker’s World championship. Carl Schlechter challenged the Champion in 1910 but limited the event to only 10 games. It is argued that Lasker agreed under the premise that in order for Schlecter to declare World Title, he MUST win by two points. This meant that both players were desperately playing for wins with sharp aggressive lines. Despite that, the first few games of the match played in Vienna were drawn and Lasker actually lost on the fifth game. When they reconvened in Berlin, four more draws followed. This meant that in order for Lasker to retain the title, he HAD to win the last round. Schlechter also had to play for a win in the final game though in the book,Lasker’s Greatest chess games, by Reinfeld, he cites only a draw was required by Schlechter to win the championship casting some doubt on the two-point rule. The following game is not with out positional blunders from both parties. Schlechter’s final misstep is what enabled Lasker to take this final match game to full point.

Posted by BlunderProne at 11:06 AM

I think Lasker was more solid than his contemporaries.

Capablanca was the next generation of chess, and probably an improved one.

The pioneering generation is aided by "right place, right time", and "the first-mover advantage."

Nice games. I liked how he solved the opening against Marshall best.