Alexander Kotov was born on August 12, 1913 in Tula, Russia. He was about 40 at the time of this candidates match in Zurich. He studied engineering in Moscow in 1939 but also studied a great deal of chess by then. In fact, in 1939, he almost beat Mikkhail Botvininik in the USSR Championship in the final round. The result qualified him for the title of Soviet Grandmaster, the third Soviet player to hold that very title after Botvinnik and Levenfish.

A couple more pre-Zurich matches that are noteworthy are his win as Mosco Champion of 1941; winning the Soviet title together with Bronstein in 1948; and winning in Venice in 1950 ahead of Smyslov. In 1951, he was granted the title of International Grandmaster at the age of 38! He won the interzonal in 1952 which was the pre-qualifier for the Candidates match.

A look at his games here in Zurich reveals a resourceful attacking player not afraid to mix things up a bit. In round 11 he plays White against Taimanov in a pseudo Reti/English opening. Kotov gets both of his bishops on the long diagonals while Taimanov tries for his usual Queen side grab. Missing an opportunity to free up his game and utilize a mobile pawn center, Taimanov instead locks his pieces up on the Queen side allowing Kotov to one by one migrate the entire team to an unstoppable attack on the King.

Round 10 shows a classic struggle in the Najdorf against Gligoric. White survives Kotov’s notoriously vicious Sicilian with a position that should play itself. But as Bronstein puts it, “The road to victory is a narrow path of precise moves”. Gligoric would haver faired better had he chosen the “natural” moves like Rooks on open files; then on to the 7th rank, pile up on the backward pawn, create a passed pawn then queen it. He decided to create tension in the center. Kotov, not being one to shy from a complicated game, takes the initiative, then the open files, then the occupation of the 2nd rank…and follows through with the very things White should have done. It’s a nice turn about.

Round 14 wins Kotov a Brilliancy prize against Averbakh. This is one of those games that is almost as famous as a century ago with Anderssen vs Kieseritzky. It involves a queen sacrifice of the intuitive nature. One that goes beyond, Kotov’s tree of analysis stuff. On Move 30 the following position is reached with Kotov ( Black) to move: 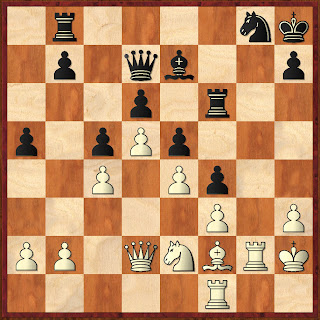 The creative element in chess is generally thought to consist of three things: logic, accurate calculation and technique. There is a fourth ingredient also, however, perhaps the most intriguing of all, although it is often overlooked. I refer to intuition-chess fantasy, if you prefer.
Occasionally a position arises in the course of a game which cannot be evaluated on general principles ( pawn weakness, open files, better development), since the state of equilibrium has been upset on several counts, rendering an exact weighing of the elements impossible. Attempting to calculate the variations doesn't always work, either. ( he goes on to say:) ... It is fantasy or intuition that comes to the rescue, that has given art to chess its most beautiful combinations, and allow chess players the joy of creating....Intuitive games were not only played in the days of Morphy, Anderssen and Chigoran.

30… Qxh3! Comes out of the blue. The whole point of the sacrifice is to draw the King out to f5 where it is exposed to the two rooks, knight and Bishop while White’s other pieces sit hopeless. It’s rather beautiful.

In the next round, he beats Szabo in a game of opposite wings castling. But, being Kotov, this is not your typical pawn storm versus pawn storm on opposite wings. Rather, both sides end up pushing pawns in front of their own kings? Why? A game with a closed center tends to have peculiarities as such. Black castled short and attempted a break on the g-file and advanced the pawns. Meanwhile, White, castling long, gets a break on the b-file and fills it with major pieces. Both sides had breakthroughs but White had the initiative.
In round 23, he beats Reshevsky when he should have lost. The game looked rather drawn for the first 28 moves with lots of maneuvers but no real targets. Boredom coupled with the desire to mix things up, makes Kotov take a risk with a pawn move that weakens a couple key diagonals ( moves the f2-f4 and now c5-g1 and a8-h1 are weak). Reshevsky over-estimates the possibilities and returns the favor to give Kotov a chance to equalize and wiggle out of complications. Like a cat, he survives the middle game and enters a knight and pawn ending with a stronger knight position. Reshevsky attempts to sacrifice his weaker knight to gain two passers but they get stopped as Kotov had his own baby queen en route.
Smyslov, as you may know, is the key player in this match ( not to spoil the series…but since the book has been around for almost 40 years… Smyslov wins). He’s almost undefeated until…. Round 21 against Kotov. Kotov plays 1.c4 and brings on a space grabbing closed position. Black recovers from the opening by liquidating the center and then advancing and fixing a pawn on White’s e4. At one point, it appears Black gets over confident and lands a knight in a way the allows Kotov to sacrifice a rook for two minor pieces. The endgame shows how the “extra material” can be of advantage. Huzzah!
In a loose translation from Kotov’s “Memoirs of a Chess Player” :

At that point, Smyslov was leading. I was somewhere in the middle of the tournament table. Reshevsky was right behind Smyslov. The reader will understand my situation: just as in Groningen, I had obstructed a colleague’s path to the supreme sporting title, without the win bringing any material improvement to my own tournament position. I understood very well the absurdity of what had happened, and that I would not get any plaudits for this win over Smyslov from my compatriots, who so closely shared in the successes of the Muscovite.

It is sufficient to say that when, as usual, I telephoned my wife in Moscow that evening, she immediately asked me:

“What are you playing at over there? I’ve had chess fans on the phone here, cursing you. Is that what you want?”

But there was nothing to be done – sport is sport! I secretly hoped that I would be able to undo some of the damage later on. I still had one more game to play against Smyslov’s main rival, Reshevsky. And so it happened. Exploiting Reshevsky’s inaccuracies, I won.

Epilog:
Alexander Kotov’s Legacy is in his writings. I think one of the most popular books is “ Think like a Grandmaster” where he talks about the tree of analysis and other ways to prune the candidate moves. What’s even more remarkable is that until that book was published, we had “handbooks” on positional play, tomes on endgames and openings, puzzle books but none really on thought processes. He had a whole series on the “Grandmaster” theme. He was a very prolific author. He died in Moscow on January 8, 1981.
Posted by BlunderProne at 9:04 PM

What a great game with the queen sac. What strikes me in the game is just how much maneuvering they both did leading up to it. It shows a great combination of strategy leading to attack and tactics. To me, that's the most satisfying kind of chess, the most instructive kind of game to learn from. No gimmicks, no tricky trappy ticky tack crap lines to trap your opponent. Solid play, building up little advantages, and then to me the key beautiful pawn push 28...f4, to keep the white bishop locked in and capitalize on his Kingside piece coordination.

Kotov I always imagined as dry, boring, mechanical, but clearly not this guy was a magician too!

hi
can you please add a link to this page
http://www.alilg.com/games/free-online-chess-challenge/
at your blog, if you liked that page?
thanks.

I guess Kotov will be mostly rememebered for his books rather then for his chess results.