Hastings 1895: Mikhail Tchigorin, Cornerstone for the Soviet School of Chess 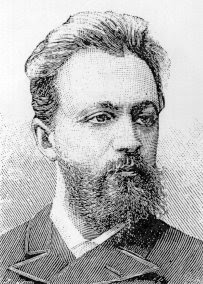 Mikhail Tchigorin ( Chigorin is “western” spelling and will be used in the rest of the text), was born on October 31st in 1850 ( according to the bio in the Hastings manual) and orphaned by age 10. In 1859-68, he was brought up in Gatchina Orphan Boarding School of Emperor Nicholas I. It was there, at age 16 he learned the moves from a teacher. It wouldn’t be until he reached his twenties that Chigorin would get competitive. After starting his career as a government official, he decided to bag that idea and take up chess after having some success in the late 1870’s and early 1880’s with the likes of his teacher, Schiffers and other players like Alapin and Blackburne.

By the time Hastings 1895 rolled around, at age 45, he was considered one of the top 4 or 5 players in the world having played several matches with others in the elite class of chess players. Hastings 1895 was to be his best performance and had he not lost in round 20 against Janowski in only 16 moves, he would have won this event outright!

Prior to that, Pillsbury and Chigorin were neck and neck. He led the pack up until round 10 when he drew against Bird. Pillsbury was either on par or a half point trailing until round 20.

Clearly, against Pillsbury in round 1, he dominated tactically while being a rook down in round 1. 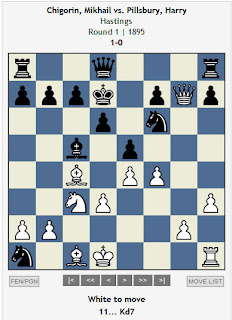 He definitely had a style rooted in the old school of the romantic period as seen in this Kings Gambit. I believe he had an edge tactically and this allowed Pillsbury to take his rook with the advantage of gaining a relentless attack. If you like some swashbuckling, this is one of those that is almost on par with the Anderssen vs Keiseritsky immortal match.

In round 2, he is paired against the OTHER top seed, Lasker.As black, he drives the game into an imbalanced dual bishops against his dual knights. The only concession being a better pawn position for the knights. After a long arduous battle, Lasker makes a subtle rook blunder in this position: 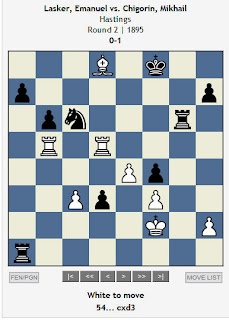 Lasker takes the pawn on d3. Better would have been 55 Bc7 to keep pressure on the kingside advance as well. Steinitz’ annotations suggests that after Bc7, it is unclear that Black can win and a draw might have been eminent.

With the two power houses out of the way, one would think Hastings would be a breeze for Chigorin, but the competition shows that the opposite is true. When faced with a tough position, it’s been noted that Chigorin’s temperament would show an agitated man. However, his playing style featured a well honed tactical ability and an imaginative approach to the opening.

He rejected many of the inflexible doctrines put forward by Tarrasch and Steinitz, but accepted Steinitz' teachings about the soundness of the defensive center. It comes to no surprise that his treatment of the French defense seen in games against Teichmann in Round 6 and Blackburne in Round 8 has his signature 2.Qe2 move designed to delay black from playing 2...d5 because of the tempo grabbing 3.exd5 Qxd5 4.Nc3. In both games, he defends the center rather well before opening it up with an advantage that allows him to either penetrate on the queen side or gain material for a favorable endgame.

His win against Blackburne in round 8 won him a special prize from MR. Bradshaw ( an enlarged photograph of the players at this event ( I’m led to believe) for the first to win 7 games.

In round 14, as black against Kurt Von Bardeleben, he takes down a stonewall attack effectively. 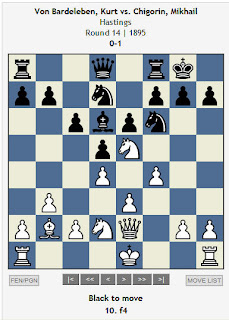 This is partially due to the fact that his opponent plays blindly into an attack that requires the support of his king’s bishop which Chigorin removed early on.

Along with the Prize of 115 british pounds for placing second at this event, he also received a “handsome ring” presented by Mr. J. Cooke and a book, Theory and Practice of Chess by Carlo Salvioli for winning the most Evans Gambits accepted. ( He beat Pollock as Black, Drew against Bird and won Gunsberg as white with the Evans gambit).

He started the St. Petersburg Chess club in Russia and took over Schiffer’s role as Russia’s prominent Chess Teacher at the turn of the century giving lectures, writing articles and supporting periodicals. His tournament results post Hastings included a couple more strong performances at Budapest in 1896 and Cologne in 1898. Sortly after that he had some disappointing results. In 1907 he had an exceptionally poor result which may have been a result of his poor health. Later, in 1908, he died of complications of diabetes and a degenerative liver ( from drinking a little too much).

Through his original talent, lively games and prolific teachings, many Russians regard Mikhail Chigorin as the founder of their 'School of Chess', later to become known as the Soviet School of Chess.

Next up: Harry Nelson Pillsbury
Posted by BlunderProne at 4:30 PM

Interesting stuff! Blows me a way how he lost that game in 16 moves. I thought only us dumb patzers did crap like that. LOL

So it's true that the Russian school is founded on alcohol:)

Again an intresting piece of history. Very well written and presented. Once again a big thank you for doing this. It's very intresting and educational.

Dude, these are seriously awesome and show your love for the game. Thanks for these...

In 1892 Chigorin played match for the world championship with Steinitz.
After 22 games the score was 10.5:11.5. He was winning 23rd game, that would have evened the match. In the time pressure he lost the game and the match after one of the most terrible blunders in the history of chess:
http://www.chessgames.com/perl/chessgame?gid=1036366

Uh, oh you just stole my lunch break with that awesome post. Back to work with me.

Great post. Thanks for the series. However, how you are pasting the pictures in your blog? I mean I have just started a chess blog here in the blogspot but can not paste any image in it. How can I do that?
Alimuzzaman