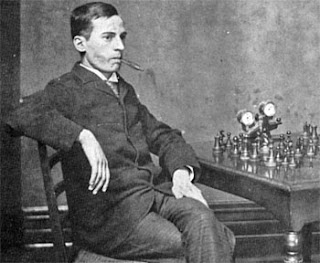 Born on December 5th, 1872, he was 22 at the time of this tournament. He learned chess in 1888 at the relatively late age of 15. His first chess teacher was Addison Smith, a member of the Boston Chess Club who lived in Somerville. Pillsbury grew up in Philadelphia and made a name for himself at the Franklin Chess Club.

He didn’t start taking this game seriously until he was 17 years old when, in 1890, Pillsbury 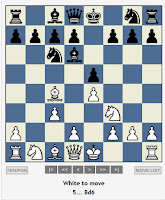 played a series of Evans Gambits with the veteran Baltimore expert, H.N. Stone. He was one of the inventors of the Stone-Ware defense in the Evans. Pillsbury smashed him 5-2.
His knowledge of openings showed his resourcefulness to garnish older variations with his own added twists. This is especially seen in a couple Evans Gambits ( against Bird I covered back in the first chapter of this series). With Schiffers, he plays a 5…Bd6 , something not seen in Europe since the days of Kieseritzky and Mayet. Having trained with this variation from local American players H.N Stone, he had an advantage over his European contemporaries. Oddly enough, playing this against both Shiffers and Bird, was a bit of a risk since both opponents would have been old enough to remember games by Mayet and Kieseritzky. 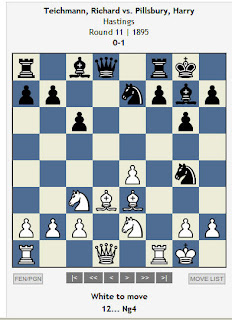 Teichmann allows Pillsbury to plant a dangerous knight on g4 followed up with a series of forcing moves.

Tarrasch uses the Tarrasch defense against Pillsbury power 1.d4 system but in the end a carefully staged knight sac seen here counters the queen side push. Throughout this game, black’s plan was to capitalize on a queenside push while White kept the pressure on the kingside. This finally comes to a head starting with the characteristic Ne5 leading what will later be called the “Pillsbury attack”.

He meets Steinitz in round 7. He picks up a small advantage in the opening and holds on to it. His aggressive handling of the Tarrasch defense of the QGD allows him to weaken black’s kingside pawns and gave him a more flexible position.

Clearly, at Hastings 1895, Pillsbury had command of the popular QGD Orthodox defense from the white side. Several of the first few rounds he was victorious as he dispatched his queens bishop early to g5 pinning Black’s knight and delayed the king bishop until the decision was made on how to handle the center.
Effective use of semi-open c-files distracts Burns for instance, as he is busily defending the weak c-pawn, BAM! 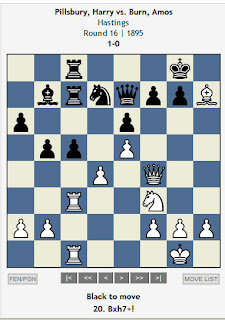 His style of play at the turn of the century and that of others like Lasker, with attacks on h7 and knights on e5 and so forth, prompted the dawn of hypermodernism and the Indian defense. The Fianchetto of the king’s bishop was an early remedy for Bxh7 attacks and knight and queen mating nets.

Pillsbury was also know for his ability as a very strong blindfold chess player, and could play checkers and chess simultaneously while playing a hand of whist(a trick taking card game), and reciting a list of long words. He’s been known to play up to 22 blindfold games at a time. 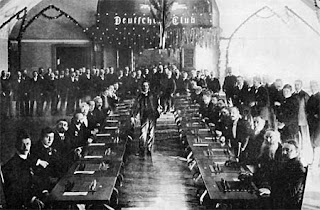 He was a bit quirly at the tournament. He refused to stay at the hotel where everyone else

stayed and preferred the quiet solitude at another establishment down the road.

He was virtually an unknown at this event. He walked in and finished ahead of great players like Lasker, Chigorin, Tarrasch and Steinitz. He’s been called the “Hero of Hastings” or the “ sensation of Hastings” for his first place finish that netted 150 pounds.

His next big tournament was in Saint Petersburg the same year, a six-round round-robin tournament between four of the top five finishers at Hastings (Pillsbury, Chigorin, Lasker and Steinitz; Tarrasch did not play). Pillsbury appears to have contracted syphilis prior to the start of the event. Although he was in the lead after the first half of the tournament (Pillsbury 6½ points out of 9, Lasker 5½, Steinitz 4½, Chigorin 1½), he was affected by severe headaches and scored only 1½/9 in the second half, ultimately finishing third (Lasker 11½/18, Steinitz 9½, Pillsbury 8, Chigorin 7). He lost a critical fourth cycle encounter to Lasker.

In spite of his ill health, Pillsbury beat American champion Jackson Showalter in 1897 to win the U.S. Chess Championship, a title he held until his death in 1906.

Poor health would prevent him from realizing his full potential throughout the rest of his life. The stigma surrounding syphilis makes it unlikely that he sought medical treatment. He succumbed to the illness in 1906. 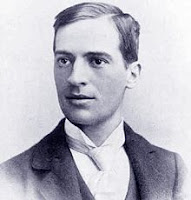 Pillsbury is buried in Laurel Hill Cemetery in Reading, MA. A ceremony honoring the 100th anniversary of the death of Harry Nelson Pillsbury was held on June 17,2006 in Laurel Hill Cemetery. A memorial marker was unveiled at that time. Guests of honor at the ceremony were Pillsbury's great-grandniece, Deborah Hart of South Hadley, and her son, Christopher Logan Hart, a resident of Hastings, England


I want to finish this series with a wrap up of the other players not already mentioned.

Posted by BlunderProne at 6:20 PM

I guess Pillsbury has a new fan since he was born almost exactly 100 years before me (2 days difference). :-)

Nice summary of H.N. Pillsbury's short but remarkable chess career. Perhaps you can shed some light on my quest for the origins of the term Pillsbury's Mate for a particular checkmate pattern similar to Morphy's Mate. I've written a piece highlighting some essentials of what I've so far learned at my
Chess Skills blog.

Excellent work as always!!! Great fun on a Saturday afternoon going through this.