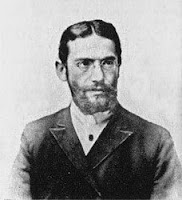 Note: To ease the viewing of the games, I created single post games at chess.com linked in this post.

It isn’t that uncanny that he placed 4th at Hastings just ahead of Wilhelm Steinitz. In their long 72 move game , these two positional players of the modern era were well matched. Tarrasch was Steinitz’s contemporary and was able to finally edge his way to a win with patience and tenacity over his predecessor who was almost twice his age.

Dr. Seigbert Tarrasch, a medical doctor in practice, was a very influential chess writer who wrote several books, including Die moderne Schachpartie ( the Modern Chess) and Three hundred chess games. Although his teachings became famous throughout the chess world, until recently his books had not been translated into English.

In the 1890’s, Modern Chess took some of Wilhelm Steinitz's ideas (e.g., control of the center, bishop pair, space advantage) and made them more accessible to the average chess player. He wrote rather dogmatically about the game making it more like formula. In other areas he departed from Steinitz. He emphasized piece mobility much more than Steinitz did, and disliked cramped positions, saying that they "had the germ of defeat."

One of the little known facts about Tarrasch is his revelation of the importance of pattern recognition, 50 years before DeGroot published his studies and 100 years before Michael De La Maza’s Circle training ( launching the “cult” of the knights errant).

“ A thorough understanding of the typical mating combinations makes the most
complicated sacrificial combinations leading up to them not only not difficult,
but almost a matter of course” - Tarrasch

One of Tarrasch’s most famous combinations comes out of his round 4 victory over Walbrodt. The position below follows after move 33… Nh5. 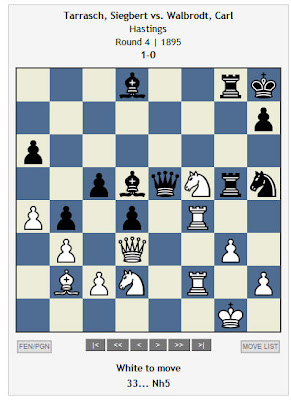 Tarrash’s position isn’t all that great as he’s facing a battery of rooks, Bishops and Knights precipitating down on the king side like a hurricane with its eye, the queen on e5 approaching rapidly.

Against Blackburne in round 16, the position below is after he plays 27.Rxh6! Both his rook and Bishop are hanging in the position but it is too much for the Drunken Master. 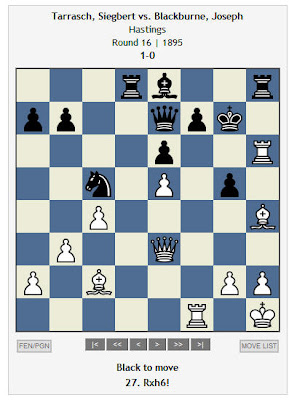 f the 1890’s often time getting invited to play such rivals like Steinitz and Lasker. He declined the offers because of the demands of his medical practice only to be second fiddle to Lasker over the next few decades. At Hastings he managed to defeat Lasker in an endgame with Knight versus Bishop ending that Lasker takes a misstep with an advanced pawn allowing Tarrasch to sacrifice his knight but then march his connected passed pawns to a win.

His dogmatic approach to the game was probably overstated. Rather, following the romanticism of the Anderssen and Morphy era of chess, he provided an antidote that augmented Steinitz’s Positional ideas marked with new concepts of piece mobility and control of the center not only through direct occupation but through long distance influences. Some say that his ideas was what sparked the Hypermodern movement. I think, if anything it laid the ground work for the next generation of players. Whether it was an IQP position played with precision against Janowski, or a more hypermodern control of the center against Steinitz, his ideas were refreshingly effective and timely.
He scored a total of 14 points at this event with defeating 12 : Lasker, Steinitz, Schiffers, BlackBurne, Wlabrodt, Burn, Janowski, Bird, Albin, Marco, Tinsley and Vergani ( most of the lower half) with draws against 4: Bardeleben, Schlecter( but most everyone drew against him), Gunsberg and Meises.
In 1908 he was asked for a match against Lasker. The story goes that when they were introduced at the opening of their 1908 championship match, Tarrasch clicked his heels, bowed stiffly, and said, "To you, Dr. Lasker, I have only three words, check and mate" - then left the room. Lasker did beat him decidedly with 8 wins, 3 losses and 5 draws.
His "swan song" event was probably Saint Petersburg 1914 where he placed 4th again but it earned him the title of grandmaster when Czar Nicholas was granting the original titles to Capablanca, Lasker and Alekhine in addition to Tarrasch.
Not that I am obsessed with "the tragic lives of chess players, however I will mention that Tarrasch had three sons. One of his sons, Fritz, died in the First World War. He died on May 14, 1915. He was a Lieutenant in the 15th Bavarian reserve infantry regiment. Tarrasch's second son committed suicide. Tarrasch's 3rd son was run over by a train in Munich in 1916 and died. This probably explains why he pretty much dropped out of chess after 1914.
His last chess book, Das Schachspiel was published in 1931. In 1932 he published his own chess magazine, the Tarraschs Schachzeitung. He published his magazine the last 18 months of his life. He died on February 17, 1934 in Munich at the age of 71. 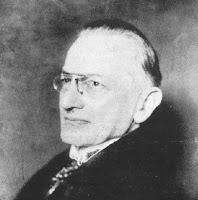 Posted by BlunderProne at 12:49 PM

34. Rxd4 in the first game is very impressive. Many years ago I learned and still remember his expression:
"All rook endings are drawn".

Pity that he never had a shot at the world title (if i recall correctly).

It is "Siegbert" not "Seigbert".