The Grinch during off season 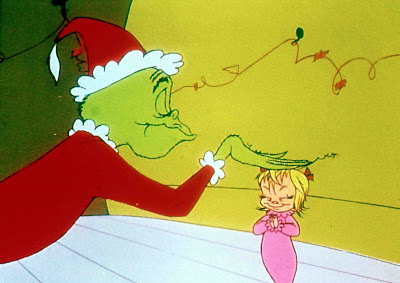 Tuesday I was in fear for my life over a 9 year old Asian girl who could pass as Little Cindy-Lou Who from the classic Dr. Seuss’ Story of how the grinch Stole Christmas. I saw through the cuteness, knowing she is ranked in the top 10 in the US for her age bracket. Being the epitome of the chess bully that I am, I approached this game with much grinch-like fan fare, complete with flaring nostrils, bushy eyebrows and “the Scowl”

She looked on with a blank expression, blinked those adorable eyes and moved 1.e4. I snapped 1…c6 Take that ! You are no match to My Caro-Kann BWAHAHAHA!

Calmly she continued 2.d4 d5 3. exd5 cxd5 4. Bd3 Nc6, 5. c3 Qc7 HAHA! My “secret weapon” to the exchange C-K. Intending to disrupt her rote responses of placing a bishop on f4 and knights on f3 and d2. She was on to me though. The subtle 6. h3 was her continuation. I kept on developing …. Typically if she would have played 6. Nf3 first, I pick on it first with the Bg4 and entice my opponent to play h3. to break up the pawns on her king side first. So I looked at this as a little too cautionary which actually saved me a tempo and I went on developing as did she.

I was considering opening the position and playing with an IQP to “throw her off” because I felt I knew this position. I thought of playing e5 earlier but I felt a6 was necessary preparation. A series of exchanges occurred:

I grimaced “ Well well, My dear, you go right ahead and place that on the seventh.”
( position after move 17 Re7)

Once the series of checks ran out of steam, I knew the knight was going away and I had a couple more tricks up my sleeve. With her King pushed to the queen side I was going to make a run for it with my pawns on the king side.

42. Qb4+ Kg7 43. Qc3+ Kh6 44. Qe3 I knew it was inevitable. I also knew my chances of survival were MUCH better with Queens off the board. I was slowly dwindling her pawn supply off the board and was ready to exchange rooks when I hit that point. But then I saw something better. First I need to advance as far as I could the g and h pawns. .

and now the SHOCKING 56… Rxg4! I knew with 2 connected advanced passed pawns, I could fair well against the rook. I knew this endgame a little … and she was unfamiliar. So I went for it.
57. fxg4 Kxg4 58 Rh1 h3 59. Ke2 Kg3 60 Rg1+ Kf4 . I played to f4 instead of h4. At midnight, I was bleary eyed and someone pointed out after the game that I might have been able to force a win somehow. I was more concerned in keeping her king out of the corner. She offered a draw ( I say finally accepted my offer 30 moves earlier). I extended my furry green hand, grimaced and shook her hand.
Final Position (draw)

Little Cindy Lou from Whoville ( rated 100 points higher than me at age 9) had her ½ a point stolen from her by this Grinch! My cold little black heart still beats.

-BP
Posted by BlunderProne at 6:48 PM

What a fun story and good game!