Last night, as the dawn of a new month presents a new club tournament round, I was paired with…yet again… my version of Little Cindy-Lou. 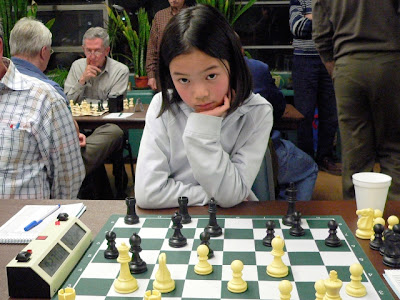 Ready for a rematch from last week, I had white this time. First off, I found myself surround by all the children from whoville. So, here I am cuddly as a cactus and charming as an eel ( you have to know the song) towering with no remorse over these little ones.

Before I could get a handshake and clock started, Little Cindy Lou asks to get a drink of water. “There! There! My dear, Shall we start now?” 1.e4 c6! Oh how cute! Last week I played the Caro-Kann against her. I suppose the best flattery is imitation. I was flattered. With all the termites showing, I smiled and proceeded down the mainline path. 2.d4 d5 3.Nc3 dxe4 4. Nxe4 Bf5 …. I paused for a moment, thought about throwing her the 5.Nc5 move I was preparing a while back against the possibility of playing a 1900 player. But, since that was 2 months ago, and my brain was full of spiders, I decided to see how far down the path of the mainline I could take her.

The rest of the game went as follows ( complete with me willfully hanging my knight for several moves with a mate threat).

I hope you don’t mind my colorful annotations from the evil mind of a chess Bully.

-BP
Posted by BlunderProne at 8:34 AM

Congrats on the win. I enjoyed your colorful writing style. I'm not very familiar with this variation, but it seems to me that 10...Nbd7? is a very weak move that leaves Black clearly worse after the move you played. In fact, 11. Ng6 is probably even more accurate because the knight is again immune but Black is practically forced to play the useless 11...Rg8 instead of the somewhat more useful 11...Qb6.

Anyway, congrats again on the win.

it's the colorful annotations i keep coming back for, you bad bananan with a greasy black peel...

I'll bet your heart is ten sizes too small.

The lead picture has become my new desktop. If it isn't yours good choice. It it is yours, it is amazing, I would love a full res version.

At any rate, excellent game! one of the things that I learned, if you want respect from the junior set.

Play them hard. They are going to play you hard.

Sorry, I am going through your game, and you have 7. Nge2

The only problem is that both knights are on the g-file. I think your move is suppose to be 7. N1e2 is that correct?

I'm glad you all like my warped sense of annotating and my trials with these phonoms in our club.

HBF: Yes, 7. N1e2 is correct. The young lady's name is Michelle Chen and you might be able to get a better resolution from our club's website directly :

I show no Mercy

Of course, this loss is only going to make her stronger...you'll have to savour wins and draws against her while you can. :D

So my 2007 Chess Bully shirt will have the slogan:

Chess Bully...beating future grandmasters while he still can.

"So my 2007 Chess Bully shirt will have the slogan: Chess Bully...beating future grandmasters while he still can." LOL! Great posts, keep it up. 9 years old and 1732? Wow.

in any event, at times i was forced to spar against a young girl, the only problem was, tiny as she was, she was totally efficient, and what she lacked in size or strength, more than made up for in superior vision of all moves, and was always there 'before' me, and i couldnt lay one finger on her.

of course, she was soon thereafter a blackbelt. humbling indeed.

i can relate to this same near child calm these future masters possess, and how oft putting it is, indeed!