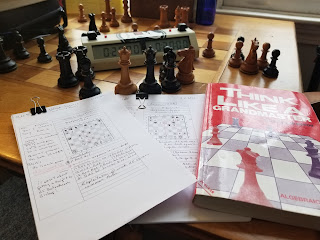 In my last post I discussed how the Kotov method of tree analysis is only as good as you capability of picking candidate moves. In this post I’ll get into how Kotov approaches positional judgement, pawn structures and planning.  I’ll state again the flaw in TLAG (Think Like a Grandmaster) is the premise made in the first section on being able to come up with candidate moves in the first place. His explanation was paltry to say the least and then goes into a positional judgement and other parts of the game that builds on the understanding for gaining insight into candidate move selections.

The second section in the book is devoted to positional judgement. He breaks it up into 4 key elements (as opposed to 7 imbalances if you are Silman follower… but similar ideas that do cross over… more of this on a future post).

Kotov makes references to Rubenstein’s ability to utilize open files setting the stage. I always thought Capablanca may have been that guy, but then again, it’s all about national pride I guess. For me, there were no real surprises or takeaways like I made in Silman’s  How to Reassess Your Chess .  For instance, beyond the normal :


There was one interesting note I made about Queen- side attacks on the Diagonal. Building up pressure on the c- file for instance by putting a bishop on b5 and occupying the 6th rank is a typical strategy for opening up opponent’s queenside.

Silman took it a step further and I’ll elaborate more on these in a later post.  Basically he felt that if there a no targets then don’t occupy that file. That meant if the king and the goods are all on the king-side and all you are going after ( in the middle game) are pawns on the queenside then you might want to re-think your plan and what the position actually tells you to do.  The same about the use of the 6th rank. It  can be as effective as 7th rank in the right instances in the later part of the middle game.

Kotov spends a little time getting into a discussion on weak squares and weak pawns which branches into a pawn structure discussion.  I think other books do a better job at this like Pawn structure chess by Andrew Soltis or even Silman’s Reassess Your Chess.  Kotov providesa  cursory discsussion on passed pawns, weak pawns and pawn islands.  He gets into weak color complexes as a discussion leading into piece placement. Pawns on same color as ones bishop blocks the mobility of that piece.
On Piece placement of minor pieces, there are better discussion on this in Silman’s book ( I hate to keep comparing these as Silman rose to the occasion with the amateur in mind.  He does cover the basics for what makes a strong bishop, when a knight is more powerful and a brief idea on when to exchange. The discussion segued into poor positions but aside from cramped positions, his remedy to poor development was to “start making threats”. If there was no direct way …just wing it was basically what he said :

This section was full of even more platitudes: “If we wish to gain noticeable advantage in space we must have a firm control over the center.”  But I did like the notion of learning to know if an opposing pawn center was an actual threat or not. “ Show respect but do not fear” was a quote from Kotov that I liked.

The general formula  of positional judgement versus concrete analysis underscores the need to internalize and formulate ones own ability around position evaluation.  For me, this means putting into words descriptively the plan for both sides.  The biggest struggle I find with positional elements whether they be from Kotov, Silman or even Nimzowitch ( My System) is how to value one inherent strength of one positional element  over another. Silman says this depends on the position as there is no one imbalance is better than the other.

The section on Planning could have been more of an extension of the pawn structures as Kotov breaks it into  several discussions on closed centers, open centers, mobile centers and fixed centers.
A closed center is one where both e- and d- pawns are locked in the center and we have a game that looks to the wings. There will be an active side as well as a defensive side with different strategies ( closed cramp defender will try to exchange to open up for instance while active position will play more like a boa constrictor)
A Fixed pawn center is a variation of closed except you may have one of the central pawns missing.  Two IQP’s locked in a face off for instance. Typically these don’t have an active side or defensive side  as its more difficult to evaluate.  The dance is around the central elements and getting enough support with the pieces in the center before switching to the wing attacks.  Both will have some considerable amount of maneuvering.

The Open center is free of pawns. Pieces play a stronger role as well as quick development. The active side will use pieces to provoke weaknesses and then attack those weaknesses.  Usually there are no pawn storms here because extra pawn moves weaken or expose the vulnerability of the position. The defender will try to reduce the attacking forces through exchange of major pieces especially.

A mobile center is more dynamic with 1 versus 2 central pawns.  The active sides will occupy the center with the pawns and try to advance and get a passed pawn. If they can’t get a passed pawn out of the deal, then using the pawns to drive the opponent’s pieces away. Use it as a launching point to attack the king. As a defender, setting up barricades and slowing the advancing pawns down are par for the course. Of course, the old adage “a good antidote to a central attack is an attack on the wings.”

After going through Kotov’s TLAG at a slow pace and setting up the positions on a board, I was inspired to dig a little more into Jeremy Silman’s How to reassess your Chess.  I’ll begin a small series  of posts on the 7 imbalances and insights I gained from that study.  Down the road, I hope to stitch my middle game studies with how to map it to my openings which is still under construction. Thanks for listening.


Posted by BlunderProne at 2:45 PM

George, I think that candidate moves come from a couple of places. 1) Exposure to ideas from going over Master games of the past. Another way of finding them is from specialized books; e.g.; "Positional Chess Handbook" by Gelfer. 2) Looking for the imbalances in the position; i.e., the Jeremy Silman method.

The most important skill to get better in chess is visualization. Here is a nice video series from a Spanish IM, who grew up in Ireland. The series is six or seven parts. Let us know how well you do, or how well you like it. I think that for perhaps most adult improvers, visualization speed is one of the biggest things holding back both their improvement, and rating.

Besides positional and strategic evaluation, there is also the power of a move. So, there are imbalances, strategic considerations, and these high-level considerations, but then each move has it's own tactical impact, from some threatened idea. So you still have to go from strategic thinking to immediate thinking on each move.

Regarding the Silman comment on positional factors, there is one that trumps the others, and that is "king safety". You can start with king-safety and then, assuming that those plans don't work, work your way back to more positional plans, a lot of times.