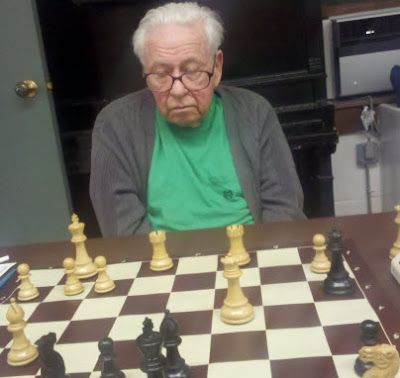 Tuesday night is my chess club night. The Metrowest Chess Club in Natick, MA has a strong membership. The players range from all skill levels and on any Tuesday we have 80 players on a regular basis. Our club has been the home for some of the strongest players in the area ( though Boylston CC does seem to have the strongest top section.) It is also where Arthur Bisguier has settled in our area for a regular chess club and we are honored. This former US champion, 3 time winner of the US Open championships, interzonal contender for world championship plays folks like me on a regular basis at the young age of 81. A much more approachable GM than my recent experience with Jann Elvhest

Since the world open, I’ve been preoccupied and consumed with other pressing things outside of chess but I do take the time for once a week to attend this great chess club and take my lumps with these old lions. The second round in this month’s tournament had me paired against the former US champion. I hadn’t been practicing since my warm up to the world open and, like I said, an outside issue has me a little preoccupied. I played black against his 1.e4 and played a new line of the C-K advanced variation I’ve been trying to get a better grip on. I play 3…c5 which at fist looks stupid because it ends up like a French defense with a tempo down. But I forgot what I was trying to accomplish. At one point I thought of reverting back to a more standard line with 3…Bf5 but I told myself that the only to get better is to dive onto this variation and take my lumps against the strong players so it leaves a more lasting impression. And what in impression it left. Arthur’s remark was “ When you play the opening that poorly, you can’t expect too much.” I thought that was funny.

Here this crappy game. Yes, it’s not spectacular but I’m not afraid of showing some of my weaker games. I get a lot of good feedback from the comments and grow stronger from the experience.

Posted by BlunderProne at 10:44 AM

The least you can do is to correctly spell the name of the world's lowest-rated GM.

Well, Arthur was born an American. Some of those cold-war born Russians, if they don't spend enough time in the USA they can give that look, can't they? That look like you are smiling at them because you just got promoted to the head of the Gestapo. A real disdain sort of response.

Of course, nowdays, I think the next generation are mostly nice. They don't identify with USSR at all in mindset.

Hopefully, some players will want Arthur as their coach and keep his involvement up.

I think that that ..c6, ..c5 line in the CK, that Sierawan was once quoted (a long time ago in "Big Book of Busts") as equal, is more or less an obvious dud. Two moves? I have played c3 line where I let Black get ..Bf5 in and ..c5 in one go, improved French, and still won convincingly as White.

Taking that e-pawn was nearly the only reasonable response to allow development. The problem with ..c6, ..c5 is obvious, White just takes the c-pawn. It's like an ideal French for White, +-.

You could have given up the exchange and played on a little bit longer for the fun of it, no?

It's a great quote from Arthur, but I don't think that was your game. You played a screwed up variation about as well as one could play it, is how I see that game.

Your play has definitely improved from all your previous study, you play very much like 1800+ player these days. Sometimes, we wanted that chess skill so bad that we studied tactics, then to find out that openings matter once again. I "pshaw!" at openings a lot, still, but I've played so many chess games that I trust my senses.

Oh wow. Are we allowed to say how jealous we are?

I got to play Bisguier in a 40 game simultaneous event back in the late 70s. The best part about it was after the games were over he asked someone to get him a quart of beer, and he stayed and told stories to the rapt audience for another hour or so.

I saw an interview with him a couple years ago where he talked about his "chess ambassadorship" saying that the game had been good to him, and he felt obligated to give back by doing things such as simultaneous exhibitions and sharing his love of the game.

Did you have nerves when you had to play this great player?

This series is awesome. looking forward to Capablanca, who is sort of my ultimate chess hero. keep it up and thx for sharing..

Great post and photo of GM Bisguier, I've been looking at his games my entire chess career!

Re: the opening, the 3..c5 variation is perfectly fine (why Botvinnik introduced it in the first place against Tal in 1961). 3..Bf5 is much more popular and is the theoretical rage, which I think is a good reason not to play it unless you really like it.

In this game, the main opening improvement would have been playing 5..Bg4 instead of e6. That immediately gives Black a considerably stronger game and avoids the French Defense-style bishop problems.

Don't be so hard on yourself!