Part 1: Dr. Emanuel Lasker, The Beginnings of the double sacrifice

Christmas Eve of 1868 in a suburb of Berlin called Berlinchen, one of the greatest Chess players in the history of this Royal game arrived to turn heads and challenge the status quo.

His big brother, Berthold Lasker had a growing reputation as a master chess player and taught his kid brother at the age of 12. I wanted to research some of his games to try and get a feel for his style to contrast with the more historically famous world Champion. I could only find a collection of 8 games here.

Rather than posting them here and making it take longer to view, I recommend at least checking out the games that Berthold had against Tarrasch. What strikes me is that these are not his strongest games since I am reading that Berthold was a master. Rather, what I see is a player who is not afraid of experimenting in the opening and breaking the chains of the dogmatic classical play. I believe this was an early influence for his younger brother though Emanuel didn’t really start playing seriously until his he was 15.

At 21, the younger Lasker surprised the Berlin in 1889 by taking first prize. In one of his most astounding games against a stalwart classical player, Jacques Mieses, Lasker sacrifices two knights. The Vienna game was a sign of the times as an alternative to the King’s Gambit.

As Black, Lasker plays a novelty for the time with 2…Bc5 and fires off a rapid development. He jumps a whole two tempi in development and opens the game up with a knight sacrifice and demonstrates how a well coordinated set of pieces can work together to take out a king still stuck in the center. Then he closes the deal and sacrifices a second knight to push the envelope even further as White’s forces are so disorganized he ends up resigning.

Quite the reputation he gained in his first strong event. A month later, he shows up in Breslau at the Hauptturnier, finishing first place earning him the title of Master. This secured him a place in 1889’s Amsterdam’s event where he placed second to Amos Burns. It was at this event where we first see “Lasker’s Sacrifice” of the double Bishops. The game is Lasker- Bauer. He plays a Bird’s opening. This colors reversed Dutch defense places strong emphasis on e5.

White is allowed to align his forces rather well at the expense of Black’s queenside special edge. It provides Black with a false sense of security as White then pounces on e5 first followed by removing the only defender left on the Kingside. Once Black’s Knight is expunged, BAM! Bxh7+ followed by a Bxg7. Like the previous game, he demonstrates a well coordinated attack by sacrificing two pieces. 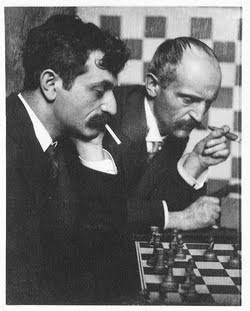 I will close part one with a game between brothers in the following year. Berlin 1890 shows the two hometown brothers to be tough contenders to a prize recently won by the younger brother. This short game is really not a good characteristic of Berthold’s ability as he and Emanuel went on to share first place with his Brother at Berlin. In this game, the student becomes the master as he teaches his older brother the perils of underdevelopment ( albeit forced).

Final Note: thanks for all the suggestions both in posts and offline. I decided to move forward with Lasker for now ( since this was the most popular choice).
Posted by BlunderProne at 9:26 PM

It's hard to beat the Lasker choice. ;-) Combos were his strong suit, sacrifices.

I didn't see a note why White resigned game #1, so I had to look at it closely.

Didn't use a computer for that, I just know that "technique" usually means a decisive final combo.

Guessing that game #3 would have gone on as Kd1 Nxf2+, Kc1 or Ke1 Nd3+, king moves QxBb4 and Black's pawn center advantage should tell.