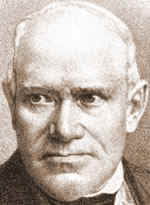 Since I too am a believer of the GM-RAM as well as thankful to DK
for sending me the PGNs of the games as well as inspiring me to go beyond the endgame exercises, I have been looking over these golden nuggets. I espeically was inspired by takchess's and Likesforest's comments here about the first game of Mayet vs Anderssen.

The major lesson I get from this is that Staunton's inattention to developement allowed Anderssen to steam roll a king side attack. Staunton's attenpt at counter-attacking was little too late.

I decided to post my feeble attempt at annotating this wonderful game from the GM-RAM collection:

1.e4 c5
In 1813, the English master Jacob Henry Sarratt christened the opening "the Sicilian Defence," referring to an old Italian manuscript that used the phrase, "il giocho siciliano." The reason I mention Sarrat is because there is one game in Chess Base that is a queen's pawn game that starts out 1.d4 d5 2. Bf4 just like teh London. He sets up an attack on that got his name called the Sarrat Attack. But I digress, back to the game. Anderssen and Staunton both were early proponents of the sicilian which helped promote the popularity of this defence.
2.d4 cxd4 3.Nf3 The Smith-Morra wouldn't come to popularity for another 100 years. For now Anderssen went for an early developmental tempo.

3...e6 Staunton realized that development was crucial over holding on to the pawn. Nc6 doesn't hold on to the pawn. White can't play 4. Bb5, black has Qa5+. White is better off exchanging in the center: [3...Nc6 4.Nxd4 Nxd4 5.Qxd4 Despite the Queen in the center, with Black's queen knight gone, White has a comfortable lead in development. Black has to move pawns to activate both bishops. White is ready to roll.]

10.e5 Qc7 This may not be exact, d5 might actually be better as it allows the bishop to develop. 11.Rae1 b5 12.f4 This setup for white is the precursor to Lasker's attack which shows up about 50 years after this. The bishops on b1-h7 and c1-h6 diagonals along with the potential of a rook luft increase the potential for a bishop sacrifice to open up the pawns on the kingside. Lasker moved the dark sqared bishop's to teh a1-h8 diagonal with lethal results. Staunton was playing for a flank attack to counter the King side but he doesn't have enough momentum. 12...Bb7 13.Ne4 Heading to g5 would be lethal for Staunton.

To placate the lazy:


I welcome all feedback and corrections. I hope you all enjoy this game.
Posted by BlunderProne at 5:00 PM

i wryly note that i sincerely hope that it is not too contriversial to simply say, 'thank you for mentioning me' but even that is sure to disturb SOME people.
:) warmly, dk

I think for those of us who like the GM-RAM, we should be indoctrinated into " The Order of the RAM".

lolz that n00b stantons opening sux. y is he famus i could pwn his dead azz lol.

Staunton at the time was 41 years old and a little past his prime. He didn't take seriously until he was 26 years old. 7 years later his greatest acheivement was beating France's best master, Pierre Saint-Amant in 1843. London became the hot spot of chess. The Cafe De La regence ( where Philidor and other previous prominent chess players came to show off) was now become second to London's burgeoning chess scene.

By 1851, Staunton had done a lot to promote the chess scene in London by writing chess columns and books. He took it upon himself to organize this historic event. Perhaps too much effort on organizing this took the energy away from preparation against the up and coming Anderssen.

Though this event turned out to be his swan song so to speak, his legacy and significance is still felt today with the standardization of the formal tournament set and London's importance of the world chess scene in the middle of teh 19th century.

Thanks for providing this--it is some good Sunday afternoon reading. It is fun having good players like you and likeforests providing a guide through some of these games.

Awesome! I'll look at and comment on this as soon as I've had a chance to annotate the game myself (it wouldn't be in the spirit of GM-RAM to look at your annotations first). :)

This was considered the first international tournament of its kind. Anderssen was the German representative who got an invite, bit because of his modest livelihood as a college professor/chess enthusiast, he almost declined the invitational because he could afford. Howard Staunton, organizor and chess "professional" offered to pay for Adolf's way if he didn't win the event.

Now, you consipiracy theorists are probably already think that Howard threw this elimination match so he wouldn't have to pay. But on the contrary, Howard was the favorite. It came with great dissapointment that after being eliminated in the third round with the two losses ( best of 3) against this young ( 2o-something) upcoming chess wizard named Adolf Anderssen, he fought for 3rd place in teh 4th round only to finish in 4th place.

He challenged Anderssen to a 21 game match to prove his chess strength. Anderssen didn't decline but said he needed to go back to work for a little while. Howard's "grudge" match never took place, Anderssen's chess prowess rose until the young American named Paul Morphy came to town in 1858. ( more on that later)

I was studying this game last week awaiting LF annotations . Glad to see you jumping in on this.

I have found that games I play often remind me of an older game giving me some direction.

What struck me in this game was blacks inability to counterattack through the center and white walk up the king side. Sweet. I looked for this game in other collections but not in Reti, Tartakover, Kasparov books.

Here is a comment from Gerard Welling, who often plays the variation of the Sicilian that Staunton employed here:

After the initial moves I prefer the active 5.Nc3 Qb6!? for example 1) 6.Na4 Qa5+ 7.c3 Bxd4 8.Qxd4 Nf6 ( two bishops but Na4 is clumsy ) 2) 6.Be3 Nc6 and the pawn sacrifice 7.Ndb5 Bxe3 leads to an unclear position but control of e5 should help black. I remember a matchgame Harstston-Basman, England 1974 as a good example how black should play. Staunton was a bit passive, 6..Qc7 was suggested in contemporary sources and Staunton was very critical on his play in this particular game in general.

Do you think it was important for Anderssen to move his king when he did? Would his attack work with an extra tempo in hand?

I don't know the answer to this but am curious.

Anderssen played some beautiful chess. I think that Gm-Ram has the games that Reti analysed of his in the Master of the Chessboard. Two of them are Falkbeers against Rosannes. The analysis of this games started me playing the Kings Gambit.

Does it work? The whole memorise them all and you get to 2500 thing? Has anyone done like 15 at least and well noticed anything? Of course like with a computer and stuff, There were probably some errors on both side seeing this is from a different time.