Chess in the 10th dimension 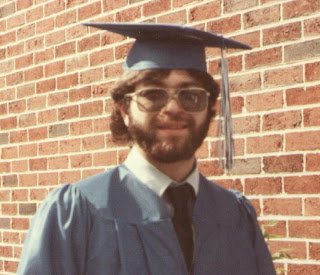 Me back in a day during my Blundergraduate degree. I had my hair cut for the graduation.

This was for those who asked. See, not quite like Bob Seger... only BS. I couldn't find one with BS- like hair.


Professor Blunder has been pondering :

I’ve been reading a non-chess book that I got from my son on my birthday last month titled Imagining the Tenth Dimension, Rob Bryanton. I must say that my Brane hurts ( as in M-brane and string theory). I was playing a game of chess the other night and couldn’t help thinking about how the concepts of chess could also be represented multi-dimensionally.
Let me see if I can do this any justice but I do recommend cheching out the java script video on this web-site
http://www.tenthdimension.com/medialinks.php


Chess Dimension 1:
In 1 dimension we only go from point A to Point B ( a line). A pawn is a one dimensional piece in it’s purest form. If you don’t consider direction, most of the pieces movements are are 1D with the exception of the knight.

Chess Dimension 2:
In 2-D we now add the X-Y directions. This now shows allows the knight’s movement as long as there are no obstacles. It also gives a sense of direction as we have Kings, Bishops and queens that move in 45 degree angles from the straight line. Castling cannot be considered in 2D since the Rook has to be lifted to get on the other side of the King given the 64-square universe we are referencing.

Chess Dimension 3:
In 3-D, the piece movement can now be fully represented. Castling can take place because in essence we can “fold” 2-D and displace the rook next the king. Likewise with the knight, it can jump over pieces. According to Bryanton, 3D is represented as a Fold.

Chess Dimension 4:
Up until now, the board was static representations of the pieces and its relative movements. In 4-D we move that form in time linearly. We have a source and destination square. There is a logical sequence. White first moves followed by Black. A game is recorded as a sequence in time.

Chess Dimension 5:
According to the author, In 5-D we add another path for time like we did going from 1-D to 2-D. Divergent paths in time can occur. Here, the same game above can now take divergent paths. Here, we can look at variations of our opening, different strategic paths in the middlegame, different calculations for tactics and endgames. The Possibilities for one game are endless and in constant flux until we actually make the move. Brytanton explains this as probabilities of possible existence in the forms of waves. Particles exist only in waves and plasma fields. It is when we actually observe them, the field of probability collapses and we observe the reality. The actual move played in the game, is reality.

Chess Dimension 6:
Suppose you make a move, and realize that it was a blunder. Then you are allowed to undo the move and try a different one. This is like how 6-D warps Space time so that now we can go from one linear time trunk to a different time trunk. This goes back to a fold of time.

Chess Dimension 8:
Now, suppose we have several chess variants. Fisher Random on one, Bug house on another, etc. 8-D is where we realize that that the single game we once thought of as the universe is now a multiverse and allows for branches into these other multiverse paths.

Chess Dimension 10:
If that doesn’t confuse you, then try this one, 10-D is taking all the Chess Multiverse as a whole… and bang! We have a single point of reality to observe. In Bryanton’s manual, the 10-dimensional strings vibrating in this dimensions is what creates the sub-atomic particles seen in the lower dimensions. This is the same as the concepts of the movement of the pieces can be transpired to the subsequent universe.

It still doesn’t help my game, but chess does allow me to imagine the 10th dimensions.
Posted by BlunderProne at 8:32 PM

ectomorphic specimen before evolution through broad shoulders to endomorphic?

me? i have not so much changed in girth as showing not inextensive roadware.

Shouldn't you be thinking about moves during a game?

Photoshop some silver in your blundergraduate pic, and you'd look like BS. I'll re-read this post when I'm sober. Hubby and I just knocked off a really nice bottle of wine for a late Valentine's toast so mind is not too clear right now.

Re-read it with a little less wine in my system. Still doesn't make much sense. LOL

Well, the point of this post goes to what Matt said. I was thinking about this during my last game which I lost. I should have stayed in the 3rd dimension traveling on the 4th dimensional timeline known as the present.

Of all the bloggers to write such a high-falutin' treatise on string theory and chess....I would not have predicted it to be you. Now I know how you feel reading my posts. :o