A strong cup of coffee in Seattle 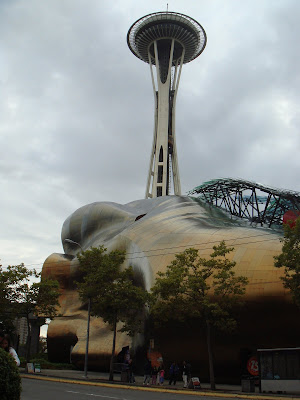 Mrs. Blunderprone and I made it to Seattle to help our daughter pack after her summer internship at Microsoft. Besides packing tape and trips to UPS, we managed to see a few sights and do the usual touristy things ( Pikes market, Museums, and Boat rides). I didn't get much of a chance to play any chess since my business was for other things... our anniversary was in celebration during the trip...meaning " Put the chess away, dear".
The closest to chess I came was a brief encounter with David K., the DK-Transformation of the Chess Improvement Blogosphere. DK is like a blast of espresso made with Arabian Mocha Sunani. One small cup delivers the full essence of an entire pot of coffee. The brief encounter on the Harbor steps had us all fully caffeinated. 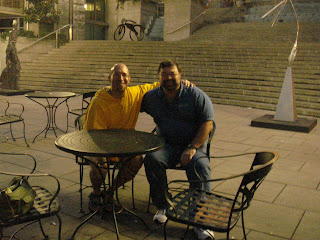 The man is as intense in real life as he is on the blogs. He is also very much in tune with all verbal and non verbal cues. My family was well accommodating in amusing me while I had to investigate this curiosity for real. DK met us as we were finishing a Sushi outing nearby and provided a good segue to our early evening adventure. David picked up on our daughter's discomfort and was forward enough to address it in a non threatening way. The Ladies wanted to go have a mom and daughter chat and excused themselves while Dave and I connected with our different approaches to CT-ART, Seattle and Stocks.

Chess has taken the back seat over the last couple weeks. I saw my folks the week prior up in Maine and had a wonderful time at my sister's house. My father commented that I need to stop thinking too much. He reads my blog regularly and laughed about how I am training "too hard". Yet, he has a slight touch of jealousy since I have access to a lot more chess resources in Massachusetts than he does. So the last couple weeks have been a good break. I've been doing some on line work but not with the same intensity.

I might make it to the New England Open next weekend.... but I have to help move our other Daughter to school first. I'm thinking of taking a first round bye. I'll be ready to get back in the ring after the moving "work out".

Posted by BlunderProne at 9:30 PM

Did you eat at the Sushi place right behind you in the picture? I think it's called Hakata's or something like that. Awesome place. I lived there for 6 years and I think Seattle is a terribly cool place.

It's cool that you got to meet a fellow blogger. I hope I will be able to go to Reno in October and meet up again with Chessloser and meet Robert for the first time.

Sounds like a nice couple of weeks BP. It will be interesting to see if the time off hurts or helps your game. Hopefully the former if we meet at the club soon :)

Wang, the sushi place was right there on the Harbor steps... I can't recall the name :(

Koji Osakaya Japanese Resturant. I ran into the piece of paper last night, quickly rummaging for scrap paper, as I NEVER run without a knife, ink pen, and ability to record for example a license plate, my neighborhood the source or random and extreme violence.

It was great to see George. I have a vacation coming, and can and will post that latter, but for now can only repeat, besides how wonderfull his family is, his heart is a wellspring, a gigantic furrow to genuine goodness, paralleled with a nimble discerning mind, despite the wear and tear of life we mutual confide to each other. :) thank you!

Glad you and your family had a good time in Seattle. :)

So...when are you guys coming to Sweden? Winter is coming and we will have a comfortable 10-15 degrees below in a couple of months. Better book your tickets now! ;)

10 to 15 below Celsius is nothing. We've had a few 10 below Farenheit here in the Boston area the last few years. One day, it was warmer on Mars than here!

I'd love to visit that part of the World some day.

I think I can get to Manchester this weekend. Please send me your personal email to discuss to