Blunder of the week

I threw away a great game against at 1700 player last night. I had white and was playing a Smith-Morra Gambit and I reached this position by move 29: 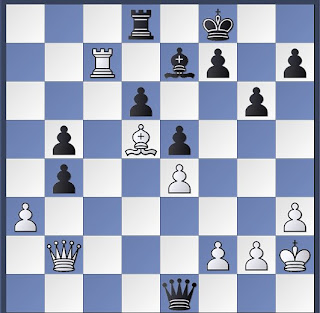 Salivating over trapping the Black queen. Black just countered with 29...axb4. Instead of first making sure I wasn't dropping more pawns left and right.. I went "Oh Boy... a Queen!" So I wiped the drool off my face and played 30.Rc1 thinking I just won a queen.

But Noooo! 30...bxa3 and I have to deal with my queen and now I am down 2 pawns. I lasted to move 64 before resigning to connected pawns on the 3 and 4 ranks with no way to stop the storm.

Had I played 30 axb4... the black queen would have had to address her situation and I would have had a better game ( perhaps... only to blunder in another part of the game).

Posted by BlunderProne at 10:04 PM

Would love to see the whole game .. where was it played?

in my opinion the position after Rc1 bxa3 RxQ axb2 Rb1 followed by Rxb2 is pretty drawish. Opposite coloured bishops + the fact that white has a wonderful bishop in the middle. Black needs very accurate play to win from there.

i would also like to see the whole game.