I played a strong 1390 player last night at the club. It happened to be a kid who is coached by IM Igor Foygel . First, the money shot: 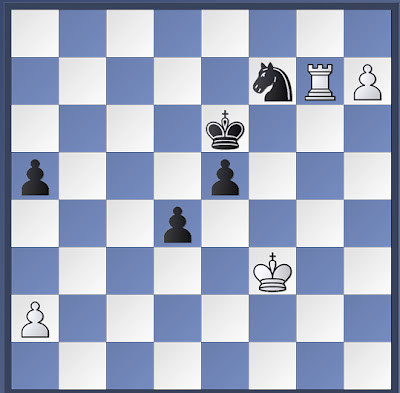 I reached this sweet position because the goddess Caissa was smiling that night. 10 moves earlier the kid had blundered his rook and gave me a game I was struggling to even get the draw. ( Rxf7 is what I played in the above position)

Frtiz is ruthless on my Skotch 4 knights play ( the kid didn't take the d-pawn instead moved to d6.) The first few moves were fine and I was cramping Black's game due to passive play. but by move 9 I started to slip down the slope of a series of bad decisions. This was the position that Firtz says Black's game is cramped: 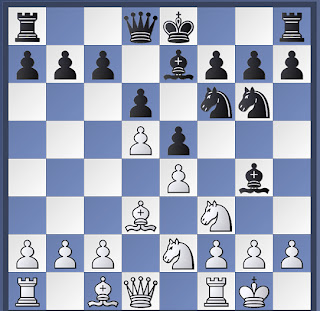 I had just played Ne2 when he brought his Bishop to g4. I was thinking of getting action going to the kingside and covering f4. I also was thinkging that the knight at f3 is no longer pinned and if he does bring the bishop over I can "hop" into action at g5... which I did. But after 9.Ng5, h6 10.f3, Bd7 I had no where to plant that knight on g5 but 11.Nh3, Bxh3 gxh3 then I said, OK I "meant" that... I wanted to open the g-file up ANYWAY! Yeah, that's the ticket.

He castled and I got created a battery leading with my queen and a rook on the g-file. Seemed to be going pretty well. then I ran out of steam. 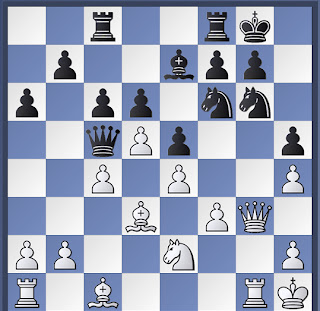 Its a rather nice position. But OTB, its hard to come up with anything tangible... at least for me. I tried making a break with h4 which he responded with h5 then i saw f4 adn played it... focusing only on a cheap shot... but this allowed him to come dangerously close to my already exposed king. Allowing Ng4 followed by Bxh4... I managed to stave off a mate and simplified the position at the cost of a pawn. I managed to keep controll of the g-file with both rooks while Black's pieces were uncoordinated. He kept snatching up q-side and central pawns while I tried to continue to put the pressure on teh king side. Then he blundered and I was given the game.

As I was heading out to my car, Igor confronted me ( in a jovial manner) " Why you beat my boy? He was ahead?" I told him it was because I knew it was "his boy" and that perhaps he should teach him Knight and rook endgames. We both laughed.

Bottom line, this year I am desparately trying to find the right moves in these kind of critical positions OTB. At home, I can take my time and figure this stuff out but in practice I REALLY Suck. The lesson here is that I was too busy chasing after a linear plan of the g-file when way back in the cramped position of move 8 ( or earlier like instead of moving Ne2) I should have made plans for a queen side play since I had more SPACE and freer mobility of my pieces on that side of the board. All too often I get locked into a bad train of thought and end up down the wrong path. Always look for a better move. ALWAYS!

Posted by BlunderProne at 9:10 PM

All too often I get locked into a bad train of thought and end up down the wrong path. Always look for a better move. ALWAYS!

I know the problem all too well

added you to my links.. good luck in your quest..

very nice blog with many things I can relate to, being an older player who quit for 37 years and now finds it tough going .. I've bookmarked you and I'll be back often.