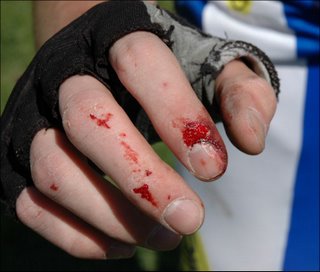 It was a good fight overall but I still lost some blood. Only a pint ( from a half pint)

Round one I was paired up against the second highest rated in my section. I had Black and played into an Exchange Slav with a new weapon, g6. My problem was that I was CLUELESS to this system because I never really studied it. I only played it because I found myself on the other side of a Pillsbury attack. I knew a fianchetto bishop is a good cure for that.

I did alright up until I had this bad plan of opening my g-file ( yes I was also castled on the king side but I figured all the pieces were on the Queen side and I could create an attack. The exception was that I really didn't have the initiative and I would have been better playing in the center. Now, who was it that said " A bad plan is better than no plan"?

Round 2 I got to try out the Smith Morra gambit! HUZZAH I won and felt I actually had a clue as to what to do. My opponent didn't take my c-pawn and instead advanced the dpawn... I was still able to storm in. I'm encouraged to continue this track. Considereing I just learned this last week!

Round 3..... Hmmm .... I played a kid I once beat in May but this time his rating had shot up 200 points ( so that's where my rating points went!) I played a White into a French Winnawer using the lines in the Perehlstin/Alburt/Dzindi book and came out of the opening a pawn up with some space. It goes down hill from there. For some reason I blocked out the priciple of exchanging pieces when ahead in pawns. I played too passive and afterwards found four blatant errors in my game. It was a rather embarassing loss too. I even threw in a howler of a move had the kid been on his toes could have snagged my queen. I deserved the zero on that one.

Round 4 was a slam dunk against 1.b3... need I say more. I used all the sound opening principles from Reubin Fine.... both my e and d pawn were in the center, Knights before the bishops, castle early and often!
Posted by BlunderProne at 9:47 PM

when i saw the picture, i thought you were in a real fight.. I thought that was your hands.