It’s been a while since I posted due to a serious reprioritization of life challenges. However, Today’s news rocked my foundations and I felt compelled to do a quick Blunderpost on this GM who was very influential in my chess career. Sorry, no game's reflected upon, just admiration for an influential chess teacher. 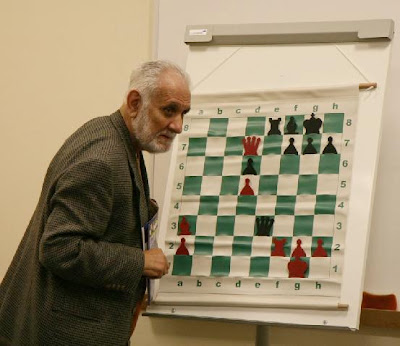 I first heard of GM Evans during the days of Fischer vs Spassky, when he acted as Fischer’s Second. However, his contributions and milestones in the world of chess spans the decades of when this game was being dominated by Russians in the late 1940’s and Early fifties through present day. That is up until yesterday, November 15, 2010, when he passed away after surgical complications.

Arthur Bisguier and Larry Evans were both tied for first place in 1949 in the U.S. Junior Championships. He went to win his first U.S Championship in 1951 ahead of Sam Reshevsky. The following year, FIDE awarded him with the title of IM and later in 1957 he became GM Larry Evans. By the time I had heard of him in 1972, he had 3 national Championships under his belt and four U.S. Open Championships tying with Walter Browne in 1971 ( another up and comer). He Won the Lone Pine 1971 that same year.

So you see , his resume was very full nationally as well as internationally where he represented the U.S. in several Chess Olympiads winning gold and silver medals for his play.

I knew him through his books. One of my first books I had was Chess Catechism, a tongue in cheek look at the lighter side of the game. I liked it because it removed any stuffy images one might have around chess players. He had a sense of humor. I also had the landmark “ How to Open a Chess Game” where he co-authored with seven other GMs of the 1970’s.

I found out that Larry’s first books were published before he turned 18 with the two books; David Bornstein’s Best Games of Chess, 1944-1949 and the Vienna International Tournament of 1922. He has written over 50 books in a career that spans 6 decades! 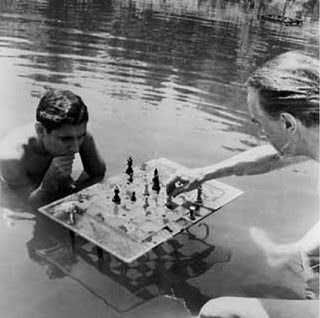 As you may recall, when I was doing my series on Lone Pine 1975, I tried to reach Larry. I did through a third party who informed me to read the book. That’s Ok by me, I understand the busy life and finding balance these days. May he rest in peace.

Not sure when I’ll come up for air again. I am still in need of a new flux capacitor for my broken time machine. It’s going to take a little time to rebuild.

Posted by BlunderProne at 9:06 PM

The first book that I partially read through of Larry Evans was this one:
"What's the best move"
It wasn't the same thing as his CL column, this was a book about which move to make in e4 openings such as the Evan's Gambit - Not the same Evans, if recollection serves, the original Evans of Evan's gambit was a sailor (in the navy!? don't know what rank, captain maybe)

In any event, the book that I was leafing through in 1991 (same time as I first read 'My System' by Nimzovich in the same library) was a hardbound book and the pages already looked really old. For all I know that book, whenever it was 'originally' printed, could be as old as me.
;-)

It would have been great to get any of his last Bobby Fischer stories that he might have been holding onto.

I am getting the impression that he was kind of reserved in a way, even if he had a strong take on things.

The first book I ever read was a nudie magazine. I read it for the articles.