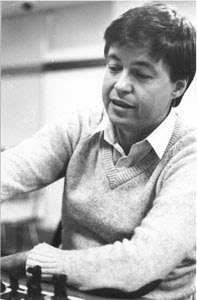 I’m back. I’ve turned the time machine back to this tournament so I can finish what I started. I searched hard for more biographical information for this Icelandic GM but all I could find was this short wiki blurb:

Let’s dive into his games at Lone Pine. I’m highlighting three Sicilians. In Round 3, he plays into the veteran Svetozar Gligoric’s Najdorf variation of the Sicilian Defense. He keeps a steady hand with the typical themes of castling King side, and advancing pawns on the Queen side. Gligoric seemed to play a little less energetically and allowed Gudnubdur a chance to build up pressure on the d-file and in particular, the d5/d6 squares where black has a backward pawn.

By move 15, Black has a couple of weakness on b6 and d6. White also has good chances to occupy d5 as well. In light of this, Gligoric does an exchange sacrifice with his rook for the White’s threatening knight. The Icelandic GM simplifies the game in a series of exchanges as there was no real compensation for the exchange.
The next game I wish to highlight is the one in round 5 against Panno’s Sheveningen variation. As a side note from an amateur chess historian, the Scheveningen variation of the Sicilian, first was debuted by Max Euwe against Maroczy in the town of Scheveningen in 1923.
The general themes of this variation are as follows:
This is a variation of an Open Sicilian where Black gets an extra central pawn. The e6-d6 form a barrier so that Black can focus on counterplay on the Q-side along the c-file. Moving the a- and b-pawns to a6 and b5.
White gets a bit of a space advantage. He also usually gets play on the Kingside.


In the actual game a central exchange on e4 plants a passed pawn on e4 for Black while giving White some control over the d-file. With most of the minor pieces traded off, the middle game struggles with both sides having awkward bishops behind their own pawns on the same color. White’s advantage lies in an outpost rook on d6. Panno makes the poor choice of exchanging his active rook for White’s bad bishop with a weak threat to follow. The game quickly turns bad for Black after.


In round 6, Larry Evans deploys a Najdorf which Sigurjonsson responds with 6.f4 this time. Larry plays some interesting variations with a king side fianchetto and a move like Nc5 making for a pseudo-dragon variation. Black gets into some space trouble in the middle game but manages to hold the position. White gets a couple of strong shots in on the d-file and begins the process of simplification. Once the major pieces are off the board, a draw is eminent.

He finishes with 6 points ( 4 wins 4 draws and only 2 losses). He earned his GM title in the same year following his performance at Hastings and at Lone Pine.

It looks like he drops out of international chess altogether after 1986. I could not find out more on what this Icelandic Grandmaster is up to these days.
Posted by BlunderProne at 8:58 AM

In the Gligoric game, playing ...e5 before White plays Be2 is a mistake (since obviously Bc4 now looks more attractive). I think even Nf5 would give White an advantage there.

White plays it positional, but is ..Nbd7 there really forced. Doesn't surprise me that Gligoric doesn't want to play with doubled pawn on f6, but it's as if Black has fallen in with White's play because apparently there is no counter to the Nc4 threat hitting d6, which prompts the weird looking queen retreat and rook sac.

I forgot to add, Qc7 looked like a mistake in game1, that move is part of the Be2..e5 system. Qd8 could have allowed ..Ne8 to protect d6 for instance.

In the Gligoric game, playing ...e5 before White plays Be2 is a mistake (since obviously Bc4 now looks more attractive). I think even Nf5 would give White an advantage there.

LinuxGuy, you clearly don't know the Najdorf. ...e5 is the mandatory move for a straight up Najdorf. The only exceptions are when White plays 6.Bg5 or 6.Bc4. When Black is advised to play e6.

My ..Ne8 suggestion was probably a blunder.

The Najdorf was my primary defense for many years. You get this really active looking defense, but when you finish developing, you start to realize how inflexible it can be.

Perhaps Black should have looked at ..h6, ..g5, dunno if that's any good or get pieces out there. Sitting tight, no obvious errors and Black concludes he is lost as the exchange sac shows. I remember that happening to me more than once. That d6 pawn was going, that's why the desperate measures.

The Najdorf was my primary defense for many years. You get this really active looking defense, but when you finish developing, you start to realize how inflexible it can be.

For anyone who's curious: embittered by the loss of Icelandic prestige, Sigurjónsson gathered resources and men to restart Viking raids in 1987.

He and his men set sail to raid the Irish coast in the winter of that year, but their longboat was assumed to have floundered as they were never heard from again.

My name is also George Duval from Macon, GA. I found your blog while bing'ing my own name.

@George... I'm so sorry that you had to discover your name sake counter part is such an uber nerd.

I have some geneology info if your interested... takes you back to Francois Duval in 1692 coming over to Quebec.