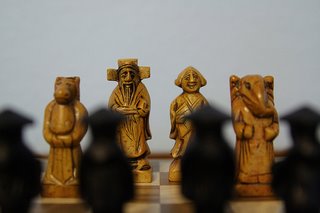 For the French, I am comfortable with the classic and have my lines prepared for the winnawer and all the other non-main line sub variants.

For the Caro-Kann... Globular was close but its a toss up between the Panov-Botvinik or the Advanced Bayonet! Being a C-K player, these were my most pesky oppositions.

Now... for the one I feared the most.... da Sicilian. Are you ready for this ... I had to go obscure ...the voices in my head suggested I do 1.e4,c5 2. c4! followed by 3.f4 if black doesn't freak and play 2.e5 pulling it into a symmetrical English Botvinik. Sick? You may think I am pawn short of a complete set, I did a database search on the position and found a couple GMs had played it. Alekhine was one, Alexandra Koestnik was the other. But the system I am following is interesting. Pretty much abandons d4 for rapid piece deployment and action on both the b and f files. Fritz had some fun with it and I hope to continue this trend with real OTB games.

Well, that's my big debut.... I am ready to play these this month but yet to have white at the club or an actual opponent. As it turned out this week, I signed up for the open section. I am the lowest rated player in the section and figured "what the hell". If I am going to lose....might as well lose to MUCH higher rated folks as I adapt to an new opening repertoire.

One of the kids at the club ( Tim B.) was upset that I was abandoning the London. Not really, I just want to put it on a shelf for a while. I need to exercise the other hemisphere and play some e4 action.
Posted by BlunderProne at 7:09 PM

Ever consider the Smith-Morra Gambit against the sicilian?

so much for keeping a secret. the scotch is fun and if you play the scotch gambit you should check out the goring gambit (i think that is the name) also the boden-kiersetsky(sp) against the petroff.
Welcome back to e4 8)
Jim

I was talking with LarryC after the Blitz match on Wed. (BTW, any chance you can come back?) and he railed on the London System! Har. I loved it.

I agree with pale, at least look at the Smith-Morra, it's actually strategically attractive as well as tactically. Often White is a pawn down for a long time but Black's pieces are so bad it doesn't matter; white can just win the ending. Plus, like your choice, it gets those damn Sicilian players (wait a tic, I'm a Sicilian player...) out of their 20 move Najdorf line real quick.

Eugene? Eugene's Book? Who me?

S-M GAmbit is intriguing and falls similar principles in "Eugene's book" where I am getting my basis for the Scotch Gambit. I may attempt that as well.

So... What did Larry have to say about that "system" called London?

But seriously, "a gm played it" is a poor excuse to do anything. play any gm in an opening gms play. make them play something poor. they will still win.

ditching the london system for 1.e4 is the best thing you can do for your chess.