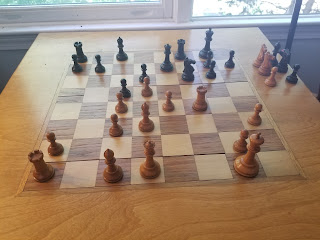 In this post I’ll finish this series around the book, How to Reassess Your chess with a brief summary on static and dynamic imbalances. But mainly, I’ll also walk you through a recent game (loss) with National Master and how, for me, it’s a learning curve in applying these. Yes, of course I lost…but not too miserably. I believe my practice is making me better at picking candidate moves as I made I all the way to the endgame with the master and a great lesson was provided.

The rest of the story:

Silman had a lot of Nimzo-Indian games in the section under pawn structures making the argument for when double pawns can become assets. I decided to shift my repertoire to using the NID because I felt it was easier to understand plus I used to play it regularly 325 years ago before switching to a Slav.

He puts a lot of rules out there for each of the imbalances that for some become common sense but for dense forests like myself I still have to think through the thickets. I believe that eventually, practicing the puzzles beyond the book and in my games I will eventually develop a better common chess sense.

A walk through a recent game.

Rather than regurgitate Mr. Silman’s words even more than what I’ve done, I thought I’d spin the board around and show you a recent game I played.  Keep in mind, over the board tournaments and club activity during the time of COVID-19 has driven everything online.  Finding a trusting group to play longer time controls than Blitz or Bullet lead me to a weekly G60 + 10s incr swiss with a local club.

My First round had me playing white against a National Master.  I knew he played the NID and I wanted to walk through the Hubner variation as I like the pawn structure coming out of the opening and familiar with the double c-pawn. 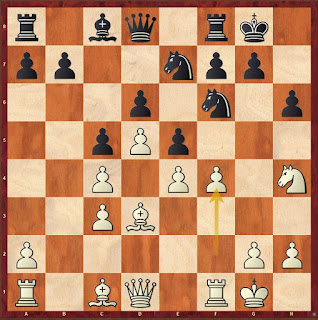 I just played f4.  I looked at the locked advanced pawn center and decide to play the 11. Nh4 with intent to advance the f-pawn because I felt I needed to open the position up a little more for my Bishops. I did not “know” this book line and the NM pointed out it was a line from the famous Fischer-Spassky match.  The favorable imbalance I had was the 2 Bishops… my thinking… open the position. Where to play? Kingside since my pieces are “pointing” there.

Tim pointed out that the 12…exf4 was not accurate and in the Fischer-Spassky Ng6 was preferred. But I “returned the favor” by capturing with my rook.  Ok, I did see the g5 fork and I felt better with my rook there as I can capture the f6 night and it’s a material exchange. I didn’t see after 13. Bxf4 g5 14. Bd2 gxh4 15 Rxf6 can still take place.  That’s why 11…Ng6 is so strong. 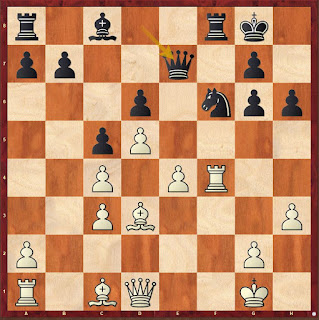 This was a critical position. My favorable imbalance with the bishop pair remains. I was looking at Black’s weakness on d6 and was looking for a strategy to optimize this.  My Rook on f4 is now sticks out like a sore thumb and my dark square bishop is jealous. But rather than calmly think through the process I feel into a “Kotov Syndrome” played 16 Qe1 thinking “dark squares” and e4… maybe I can gain something.

Suggested by my opponent was 16. Rb1 with an intent of putting some pressure on the q-side pawn majority (long term insurance for Black’s game in the endgame). This at least would bring my least played piece into the game, minor lift to b2 then over to the kingside for the party… all would have been a better plan in theme of the position.  I also think that regrouping with 16. Rf1 and if Nxe4 I have 17 Re1.

The rest of the game… I panicked and went for a series of exchanges. All opposite of what Silman’s teachings would have said.  If you are planning a King side attack, keeping the queens on the board is important. If you have space, DON’T exchange.  But no… I figured, crap! … if I disarm my opponent maybe I can get to a playable endgame 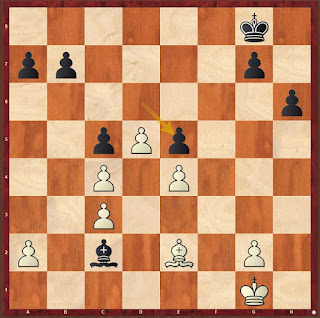 We just took the queens off the board. My opponent’s comments after the game “ every exchange was in my favor”.

Did I have a slim chance to pull off a draw or turn that passed d-pawn into something more?  In the position above I had a choice of saving the c4 pawn or the e4 pawn. In the grand scheme of imbalances, I chose the wrong pawn and this game the NM two opportunities to create outside passers.

To add insult to injury, I exchanged the bishop too!  Had I played 28. Kf2 first then after 28…Bxe4 29. Bf3 if he exchanges… My king on f3 I think I would have better managed the king side pawn majority as the pawns on the queen side could hold the line over there.

Here’s the complete game if you want to click through it.


Maybe easier to view at Chess.com

This was my first longer than a blitz game with a real opponent in months and after the Kotov/Silman deliberate training.  I still have work to do on visualization and calculations (note the 13.Rxf4 and not taking a safer approach with Bxf4) especially where I see a one mov threat ( pawn fork). My minds eye and inner panic meter seems to create blind spots that I can now focus on.

Move 16 in the game was one of those positions.  I may have spent about 10 minutes trying to figure out what the position demanded.  I wanted to open up the center just enough to BOTH bishops active.  I didn’t do a “fantasy” position as suggested by both Silman and Kotov.  Had I done that, I would have found either the 16 Rf1-e1 with Bf4 central strategy or the Rb1- b2 – f2 strategy to get my least placed piece into play.

That ends this series on my studies of Positional imbalances. I’ll continue to practice and report any progress or regressions because … it’s all ebb and flow in the learning with a leaky bucket.

I may shift gears in the next post. I’ve been doing some work in faster games out of necessity and also how I am using databases to help my training.

Thanks for putting up with my amateur insights/ oversights.

Posted by BlunderProne at 11:17 AM

LinuxGuy said...
This comment has been removed by the author.
4:40 PM

The idea of giving up the e4 pawn, instead of the c4 pawn, is a fantastic idea, but it's practically at the Expert level of endgame play. If you think that this move should be reasonable to find, then you could choose to spend a lot of time studying endgames, to build up that level of appreciation and ability.

I find that the "simple logic" of a chess position is the hardest thing in chess to grasp.