As I dig deeper into this tournament, more interesting nuggets turn up. This post will focus on a few IM’s who had a strong finish in this event. 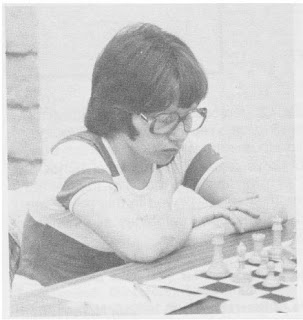 Alla was the only woman IM at Lone Pines. She came over from Israel with her other Ex-Russian compatriots, Vladimir Liberzon and Leonid Shamkovich. She was the second ranking woman chess player in the world but in order to expedite her move to Israel in 1974 from the Soviet Union, she had to agree not to enter the current cycle for Woman’s World Championship. She had been the previous challenger three times against Nona Gaprindashvili. She was awarded the WIM title in 1962 and a year after Lone Pines, she earned her WGM title.

Born August 11,1941 in Moscow, this 33 year old held her ground against GM’s at Lone Pine. She Drew against GM’s Reshevsky, Csom and Robatsch and beat GM Bilek of Hungary and most notably, the upset in round one against Larry Evans. This must have been the fire lit to drive him to place second in this event.
In the game that was highlighted in the July 1975 issue of Chess Life and Review ( her photo is courtesy of that periodical), She is shown playing a very aggressive game against a Benoni. She is able to get a mobile pawn march on the e- and f- files. Larry tries to liquidate the center with a rook for a Bishop but it’s too late.


She finished Lone Pine 1975 with 5 points following 3 wins ( Silman was her third), 4 draws and only 3 loses. I could not find much else on Alla following the 70’s. She is still listed on the FIDE website with a rating of 2430 but has been inactive since as indicated by the sparce records. If anybody knows a brief epilog of where she is now, feel free to leave me a message. 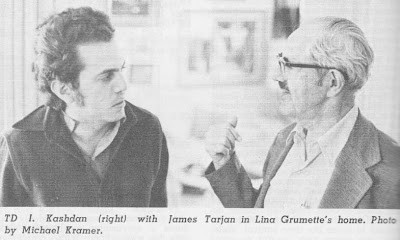 James Tarjan was 23 at the time of Lon Pines and a native Californian. Five years before this event, he was selected to American Team for the World Student Olympiad. In 1974 he earned the IM title because of his strong performance in these international junior events.
At Lone Pines, he also had a strong performance. His only loss came at the mercy of Walter Browne. He beat Rhodes and Ervin, two of the USA masters. He drew the rest of his games with 5 GMs and 2 IM’s . One of those GM’s was Gligoric and I want to highlight this game.

IN round two, Tarjan played the Grunfeld as Black against Gligoric’s 1.d4. The veteran player took him down an old variation popular in Boleslavsky’s day. The game is an imbalance bishop pair versus Bishop and knight with odds favored for the bishop pair in the endgame. Gliga attempts an early queen exchange but Tarjan is allowed a strong centralized knight before White can deploy the second bishop. It’s a nice defensive endgame and worth going over.

Following Lone Pines, Tarjan wins the next event, the Western Futurity-Qualifying Tournament against a roster very similar to the masters and IMs of Lone Pine and one year after Lone Pine 1975, he received his GM title. Tarjan continues to play in several US championships in the 1970-80’s but never was quite able to pull it off. One of his strongest finishes was in Passadena 1978 where he finished in 2nd place. This was a Zonal Qualifier and he went on to play in the 1979 Riga Interzonal World Championship Cycle. His last competitive tournament was in 1984 at the U.S. Championship at Berkley where he tied for third place.

At 61 at Lone Pine 1975, this veteran player still had some kick in him. What else can one expect from a former boxer and once rival to Samual Reshevsky and Reubin Fine? He was a U.S. 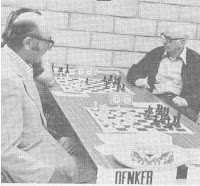 At Lone Pine 1975, he beats three GM’s, Rossetto, Pilnik, and Damjanovic of his four victories. He draws GM Bilek of his 3 Draws. I am disappointed in the tournament book not having any of his games annotated as the win against Rossetto is quite spectacular. In round eight, he plays a Modern Defense as Black and fights for early control of f5. This leaves a hole in the center for White to take advantage of and Denker walks right into a knight fork and loses his rook. Denker holds his ground as White waltzes into troubled waters on the King side. With a Knight and Rook, Denker threatens an unstoppable CHECKMATE! It was a beautiful win. I’m surprised it didn’t get any more recognition other than this humble blog.

He’s famous for going on and become an important chess organizer, serving on the board of American Chess Foundation, The USCF and the U.S. Chess Trust. The Denker Tournament of High School Champions is in his honor. He earned an honorary GM title in 1982, inducted into the Chess Hall of Fame in 1992, and in 2004 was proclaimed the Dean of American Chess. He died in 2005 after a brief illness. In my opinion, he is a role model for all of us chess enthusiasts. 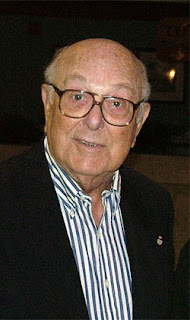 Posted by BlunderProne at 12:03 PM

Geo - great series about a great tourney. I know some of these players but didn't know (for instance) about Weinstein.

I knew of the Denker memorial but not the fact that he got his GM-title postume.

The female WIM got a good result according her status of underdog.

Tarjan became quickly after the tournament a GM, with other words he was in big form during the tournament. So one can say his result was a normal one?

Am I going to have to come to find you for your birthday every year? :)

Happy Birthday from Heart at CGCS!

Not that we didn't already know this, but those 70's glasses are nuts.

(This is why I try to only be photographed wearing T-shirts and jeans; it's some of the clothing that's least likely to be mocked by my descendants.)

Denker chose his victory over P. Erwin for his "Best Games" book--I wonder why not Rossetto? Anyway, it is a fun book full of interesting games and I'd recommend it, if you find an old copy.